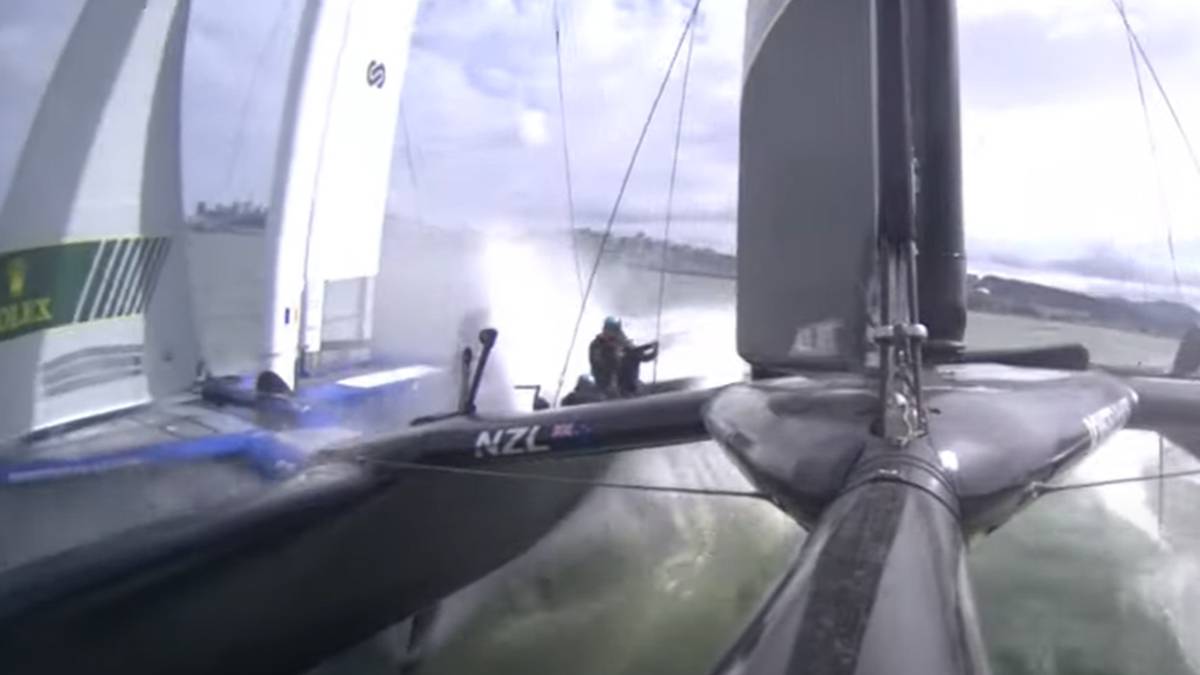 With US$1 million on the line, the final SailGP event of the year was always supposed to provide entertainment, but no one could have expected what was unfolding off the coast of San Francisco.

On the last day of racing, both fleet races saw big crashes, while the grand finale was canceled and postponed mid-race due to a whale on the course.

At the end of it all, it was Australia who came out on top, with New Zealand ending the day with a fleet victory and a heavy collision to their credit.

After a chaotic first leg that saw most boats splash at least once, the race was abandoned around the first gate as one of the beacons had come loose.

It was probably the best result for the Kiwis, who crossed the mark in seventh place after a successful start but drifted to the back of the pack soon after.

On the restart, the Kiwis got off to a much better start to sit in second at the start before jumping a spot on the first maneuver and rounding the gate first.

The Americans bypassed the gate and found themselves aboard the American ship for a few seconds. America, who had been trying to protect the trump card in the fleet races with their place in the grand final already confirmed, reportedly had a hole in their boat, while the Spanish boat sustained season-ending damage.

Spain was penalised, but it was little respite as both boats were ousted from the race.

The Kiwis rode a fairly clean run in difficult conditions, held on to their lead and claimed their third win of the season – giving them hope of a place in the Grand Final should the American boat pull out at the weekend .

Team USA pulled out of the fifth and final fleet race to assess the damage and give themselves the best chance of lining up in the $1 million shootout.

The final fleet race of the season was contested between six rather than eight – with the United States and Spain withdrawing.

The Kiwis needed to finish ahead of Great Britain in order to claim fourth place overall and first reserve for the grand final – which was ultimately not necessary as the United States was allowed to race – but chased from the start as Sir Ben Ainslie got off to the best start in the fleet.

As in the first race, there was another major collision – this time taking the Kiwis’ slim hopes of qualifying for the Grand Final and throwing them into the harbour.

New Zealand, Britain and France all looked set to cross the same body of water in relative time and as Britain crossed ahead of the other two ships, the Kiwis had priority over the French. However, the French made no attempt to change their position and the Kiwis entered alongside them.

This lost them time on the British crew, who narrowly avoided the crash, and the race simply became a kind of practice for the Kiwis, finishing the season fifth overall.

In the final, when the coastguard confirmed the whale had wandered off course, Australia pulled out all the stops. First team on their foils, Tom Slingsby’s crew took off to maintain around half a leg lead over the Americans and Japanese.

Stage four proved to be another twist on a busy day, as all three teams were left with no wind and parked on the water. But it was the Aussies who got on their foils first and fired again, regaining their wide lead and claiming victory.

For the New Zealanders, even though things didn’t go as well as hoped on the water, they were on the top step of the podium by winning the first SailGP Impact League.

As part of SailGP’s sustainability goals, the Impact League was introduced this season and sees teams measured on the positive actions they are taking to reduce their overall carbon footprint and help accelerate inclusiveness in sailing. . By winning the league, the Kiwis claimed a US$100,000 prize for their charity partner, LiveOcean.