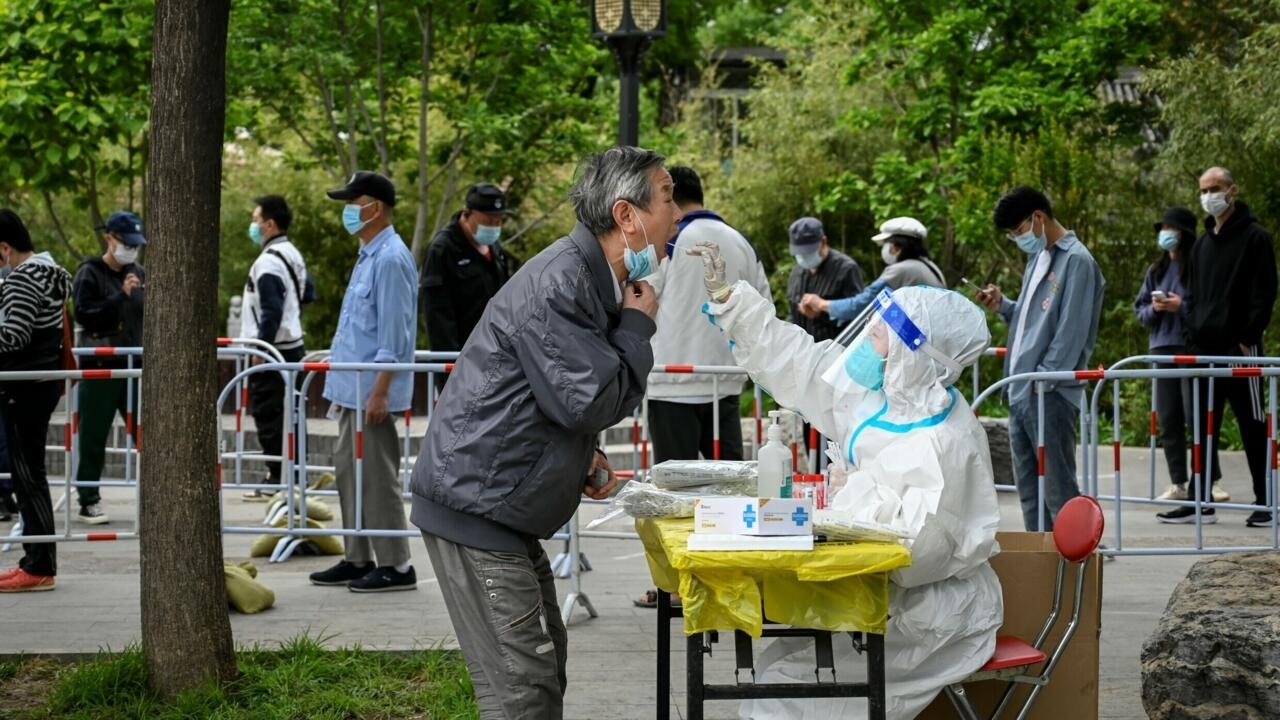 Beijing (AFP) – Millions of people in Beijing stayed home on Monday as the Chinese capital tries to fend off a Covid-19 outbreak with creeping movement restrictions.

People in Beijing fear they will soon find themselves in the grip of the same draconian measures that have trapped most of Shanghai’s 25 million people at home for several weeks.

Officials there said the eastern powerhouse was winning its battle against the country’s worst outbreak since the pandemic began.

Yet Shanghai’s lockdown has intensified, sparking outrage and rare protests in the last major economy still stuck to a zero-Covid policy.

The policy has hurt an economy that only months ago showed China was recovering rapidly from the pandemic.

Customs data released on Monday indicates exports in April fell to their lowest monthly rate since June 2020, as key supply chains from Shanghai to Shenzhen became tied down with restrictions.

There is also pressing political momentum in China’s response to the virus, with President Xi Jinping attributing the legitimacy of his leadership to protecting Chinese lives from Covid.

Xi, who is expected to get another five-year term as president later this year, has doubled down on his zero-Covid approach, despite mounting public frustrations.

In Beijing, subway stations and offices were empty during rush hour Monday morning in Chaoyang – the city’s most populous district – after authorities stepped up a work-from-home order on Sunday due to rising Covid case.

Non-essential businesses in the district, home to 3.5 million people, have been shuttered, with even the Apple store in the popular shopping district of Sanlitun ordered to close after briefly opening in the morning.

“I feel very uncomfortable seeing so few people around,” Wang, a middle-aged housekeeper waiting outside a restaurant for her shift to start, told AFP.

Beijing has reported hundreds of infections in recent weeks, with 49 new Covid-19 infections confirmed on Monday, a relatively tiny number by international comparisons but enough to prompt restrictions in the country’s political heartland.

Some finance workers were moving into hotels near their offices as restrictions began to shape daily life in the city of 21 million.

“Our company said we should try not to go home because they believe there may be risks in commuting,” said a Beijing-based investment manager who moved into a hotel near his workplace.

“Some of my friends have been advised not to take public transport to work, and to drive or ride a bike, so as not to be affected by the spread.”

Shanghai bore the brunt of Omicron’s push into the country, with more than 500 deaths, according to official figures.

The financial hub has ordered multi-day curfews for residents in several neighborhoods, according to notices seen by AFP, even as the number of daily cases has fallen to a few thousand.

Anger has boiled online over the perceived clumsiness of virus checks, mixed messaging and brutality by Shanghai officials, including taking people with negative Covid tests away in state quarantine and leaving entire neighborhoods to short of food.

The frustration has also reached the streets – in a country where protests are rare and quickly quashed by authorities.

Authorities have verified a video that was released on social media over the weekend showing residents of the Zhuanqiao city district clashing with hazmat-friendly health officials over food shortages.

“The police took action as soon as possible to persuade passers-by to disperse and calm the situation,” a statement from the Zhuanqiao City Covid Response Team said on Sunday.

“According to an on-site investigation, the troublemakers had enough supplies at home.”

Residents of neighborhoods affected by new curfews – including some previously declared low-risk areas – have been ordered not to leave their apartments except for PCR tests for a week and banned from ordering deliveries” non-essential,” according to reviews.