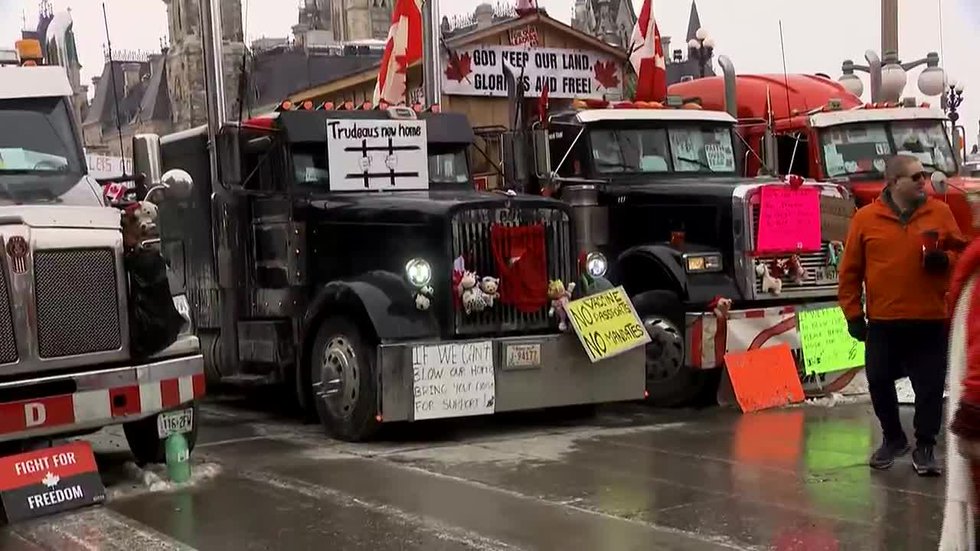 WINDSOR, Ont. (AP) — A tense standoff at a U.S.-Canada border crossing crucial to the economies of both countries appeared to peacefully dissolve on Saturday as Canadian police moved in to break up the nearly week-long blockade and demonstrators began to leave without resistance.

Many protesters moved away from the Ambassador Bridge that spans the river between Detroit and Windsor, Ont., as dozens of police approached shortly after dawn. They had spent the night there in defiance of new warnings to end the blockade, which was disrupting the flow of traffic and goods and forcing the auto industry on both sides to cut production.

Surrounded by dozens of officers, a man with “Mandate Freedom” and “Trump 2024” spray-painted on his vehicle drove off as other protesters began dismantling a small tarp-covered encampment. A truck driver honked as he too drove off, to cheers and chants of “Freedom!”

These protests at the Ambassador Bridge, downtown Ottawa and elsewhere have targeted vaccination mandates and other coronavirus restrictions and expressed fury at Prime Minister Justin Trudeau, who has called the protesters “fringe” of Canadian society.

The protests have reverberated outside the country, with similarly inspired convoys in France, New Zealand and the Netherlands, and the US Department of Homeland Security warning that truck protests could be underway in the United States.

Windsor Police tweeted that no one had been arrested by mid-morning, but urged people to stay away from the bridge: “We appreciate the cooperation of protesters at this time and will continue to focus on the peaceful resolution of the protest. Area to avoid!”

Daniel Koss was among those who stayed the night. Shortly before police moved on, he said the protest was successful in drawing attention to demands for the lifting of COVID-19 warrants and that he was glad it remained peaceful.

“It’s a win-win,” Koss said. “The pandemic is unfolding right now, they can remove the mandates, all the mandates, and everyone is happy. The government is doing the right thing and the demonstrators are all happy.

He said he thought most people would disperse in an orderly fashion, “because we don’t want to cause big trouble.”

The day before, a judge ordered an end to the blocking of most vans and cars, and Ontario Premier Doug Ford declared a state of emergency authorizing fines of C$100,000 and up to to one year in prison for anyone who illegally blocks roads, bridges, walkways and other critical infrastructure.

The Ambassador Bridge is the busiest US-Canada border crossing, carrying 25% of all trade between the two countries. The standoff came at a time when the auto industry is already struggling to sustain production in the face of pandemic-induced computer chip shortages and other supply chain disruptions.

In the capital, Ottawa, Mayor Jim Watson declared a state of emergency last week after thousands of protesters descended on the city. Their numbers have dwindled, but hundreds of trucks remain parked outside the Parliament Buildings and protesters have set up portable toilets where Trudeau’s motorcade usually parks outside the prime minister’s office.

Police released a statement on Saturday calling the Ottawa protest an illegal occupation and saying they were waiting for “reinforcements” before implementing a plan to end the protest. The statement did not elaborate.

As protesters denounce vaccination mandates for truckers and other COVID-19 restrictions, many of Canada’s infection measures, such as mask rules and vaccination passports for entering restaurants and theaters, are already falling as omicron’s thrust stabilizes.

Pandemic restrictions have been much stricter in Canada than in the United States, but Canadians have largely supported them. The vast majority of Canadians are vaccinated, and the death rate from COVID-19 is one-third that of the United States.

Demonstrations inspired by the Canadian protests were seen in parts of Europe on Saturday.

At least 500 vehicles in several convoys attempted to enter Paris via key arteries but were intercepted by police. More than 200 motorists were ticketed and elsewhere at least two protesters were arrested amid a seizure of knives, hammers and other items in a central square.

The police fired tear gas at a handful of people demonstrating on the Avenue des Champs-Élysées in defiance of a police order. Some 7,000 officers have been mobilized for the weekend demonstrators, who are protesting against the vaccination pass that France requires to enter restaurants and many other places.

In the Netherlands, meanwhile, dozens of trucks and other vehicles ranging from tractors to a car towing a motorhome arrived in The Hague, blocking an entrance to the historic parliament complex. Walking protesters joined them, carrying a banner reading “Love and freedom, no dictatorship” in Dutch.

Earlier this week in New Zealand, protesters took to the grounds of Parliament in a convoy of cars and trucks and set up camp. Police took a hands-off approach after initial attempts to remove them led to physical clashes.

Speaker of Parliament Trevor Mallard on Friday ordered his staff to turn on sprinklers on the lawn to water them and play Barry Manilow tunes and the 1990s hit ‘Macarena’ on loudspeakers to annoy them . Protesters responded by playing their own songs, including “We’re Not Gonna Take It” by Twisted Sister.