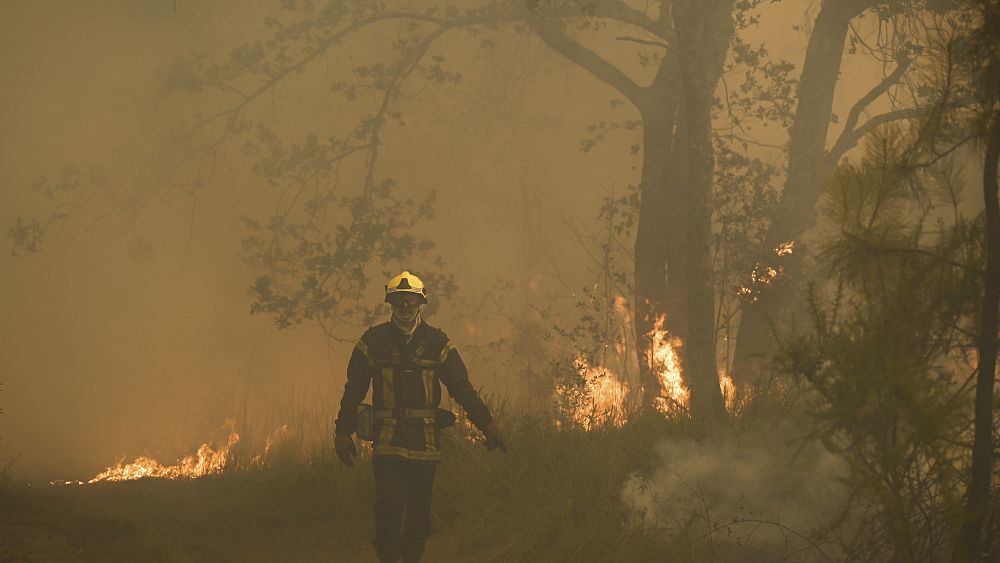 Can we stop Europe from burning every summer? Will wildfires spread further as the planet warms? Is your city, town or village more at risk today than ten years ago?

Firefighting rules are changing as the planet warms, and wildfire science is adapting as well. Experts are analyzing new datasets to help us predict when and where wildfires will start, and creating smart grids across the continent, so we can learn from each other as we fight the blazes.

To discuss current initiatives, reflect on this summer’s unprecedented fire season, and predict the future of fire prevention, we will be joined by a panel of experts.

Do you have a question for our panelists?

How much have the forest fires in Europe contributed to greenhouse gases in our atmosphere?

According to data collected by the Copernicus Atmosphere Monitoring Service (CAMS), carbon emissions from forest fires in the EU and UK this summer were at their highest level in 15 years. These figures were largely due to forest fires in southwestern France and the Iberian Peninsula, and in August alone, 508,260 hectares of the EU were burned. In total, since the beginning of the year until September 3, 750,000 hectares have been burned, compared to an average of around 260,000 hectares in 2006-2021.

It’s not just Europe that has been affected this year. Wildfires in the Amazon have also reached their highest level in 10 years, with Brazil’s National Institute for Space Research (INPE) registering 31,513 fire alerts from August 1-30 alone.

While wildfires are a natural and seasonal phenomenon and actually contribute to a healthy ecosystem, an increase in extreme weather conditions, such as prolonged drought and high temperatures, leads to an increase in high-intensity fires.

At this time, CAMS has no data directly linking wildfires to climate change, but with 17 years of fire statistics they can see that wildfires are causing the climate crisis. by increasing emissions. And many climate scientists believe wildfires will only increase as climate change brings ever more extreme temperatures.

According to data collected by the CAMS Global Fire Assimilation System (GFAS), between June 1 and August 31, 2022, forest fires in the EU and UK released an estimated 6.4 megatonnes of carbon into the atmosphere, the highest level since 2007.

How did Europe deal with the fires?

The EU has a wide range of national and international systems and networks designed to better understand the emergence of forest fires, fight them more effectively when they burn and monitor the effects once the flames are under control.

On a continental scale, there is the Emergency Response Coordination Center (ERCC), which was established in 2013 in Brussels and now has 33 participating countries, including all 27 EU Member States, as well as Norway, Iceland, Montenegro, North Macedonia, Serbia and Turkey. .

Using data collected by Copernicus, the ERCC monitors ongoing disasters and coordinates its response. They also manage rescEU, a pool of resources that EU member states have pre-committed to the cause, including 12 firefighting planes and a number of helicopters and medical evacuation planes.

This summer, the ERCC received requests for assistance from Albania, Czechia, France, Portugal and Slovenia.

The European Forest Fire Information System, EFFIS, also monitors forest fire activity in near real time. EFFIS supports forest fire management at national and regional levels for EU Member States and across the Middle East and North Africa. EFFIS produces near real-time observation of fires and burnt areas across Europe, providing urgent information for decision-makers and extraordinary insight into the fire situation for all European citizens.

The increase in forest fires has also posed a risk of death for emergency responders and local populations. In July, a firefighter pilot died in a plane crash while responding to a forest fire in Portugal. Heat-related deaths were also a big problem, with the World Health Organization (WHO) reporting that there had been 1,700 deaths in Portugal and Spain as of July 22, 2022.

What can we do to prevent future fires?

The European Commission is currently organizing an online public consultation on its proposal for a new European framework for forest monitoring. The aim of the legislation is to create an open-access source of information on the state and management of EU forests.

It’s part of the European Green Deal, which aims to improve the quantity and quality of the bloc’s forests. Although it may at first seem counterintuitive to plant more trees as the risk of forest fires increases, making existing European forests more diverse will increase their resilience. By creating mosaic landscapes, with a variety of different ecosystems and habitats, there would be natural firebreaks in the landscape, which could help reduce the spread of wildfires.

Public education is also essential. Although extreme temperatures lead to an increase in wildfires, many are also caused by human error or deliberately started, with barbecues and dropped cigarettes posing a huge risk in times of drought. Homeowners can also take steps to protect their home during wildfires. From eliminating plastic gutters to reducing fuel and wood storage, there are many ways to protect buildings and homes.

As climate change continues to drive up global temperatures, we are likely to see more intense wildfires across Europe. Join our panelists on October 28 at 11am CEST to discuss how the EU can respond.

A pyrogeographer and assistant professor at Wageningen University and Research in the Netherlands, Dr. Cathelijne Stoof also sits on the board of the International Association of Wildland Fire. She is also the Dutch National Delegate to the EU Expert Group on Forest Fires.

Legendary firefighter and expert in the field of climate change and forest fires, Marc Castellnou is an associate professor at the University of Lleida in Spain. He is also a forest fire commander for the Spanish government.

Mark Parrington is a senior scientist with the Copernicus Atmosphere Monitoring Service. His work includes monitoring emissions from wildfires and emissions from anthropogenic and natural sources. He has over 15 years of experience in the field of global atmospheric composition research.

Euronews science journalist Jeremy Wilks covers everything from climate change to healthcare innovation. He has reported on scientific research, innovation and digital technology across Europe for over a decade. Jeremy is the presenter of the monthly series Climate Now on Euronews and presents the new podcast Ocean Calls.

2022-10-24
Previous Post: For Haiti in difficulty, the return of cholera is a “catastrophe”
Next Post: WWD recognizes Jacquemus as the most successful fashion company, small capitalization – WWD