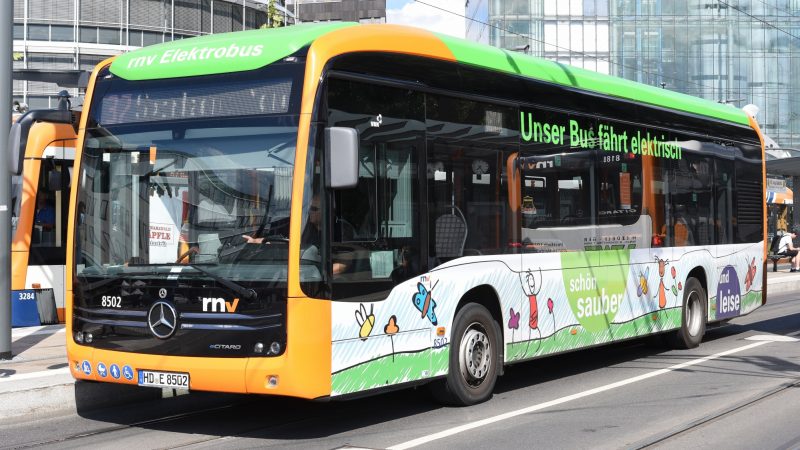 Automakers will only keep pace with growing demand for electric buses if regulators set a date for phasing out fossil fuel bus sales in 2027, claims James Nix.

James Nix is ​​freight manager at Transport & Environment, an NGO that campaigns for clean mobility.

Cities are buying more and more electric buses. Nearly one in four newly registered city buses in 2021 were zero emissions, according to new data.

All very positive news. But how do you get all new city buses to be zero emissions as soon as possible?

Current policy is rapidly being overtaken (the Clean Vehicles Directive will only take zero-emission bus sales above 30% after 2025), overtaken by the European Green Deal – and the yawning gap is opening between demand zero-emission buses and current targets.

Cities are rapidly moving away from fossil fuels – usually starting with their own public transport fleets – and they want more zero-emission buses as soon as possible. Some bus manufacturers are stepping up their efforts, Daimler and MAN, for example, pledging that all their new city buses will be zero emissions by 2030.

If demand continues on its current growth trajectory, European cities will want 100% of new city buses to be zero emissions by 2026. The missing ingredient is EU legislation that meets demand by forcing manufacturers to only provide only zero-emission buses.

Later this year, the European Commission will publish a proposal to reduce emissions from new buses and trucks. It is the right tool to align buses with the ambition of the Green Deal and provide a growing supply of vehicles that significantly reduce emissions and air pollution.

Which countries are leading the deployment of zero-emission buses?

In 2021, all new city buses registered in the Netherlands were zero emissions. Other countries are catching up, including Bulgaria, Denmark and Finland, all of which recorded electric bus deployment rates of over 70% last year. 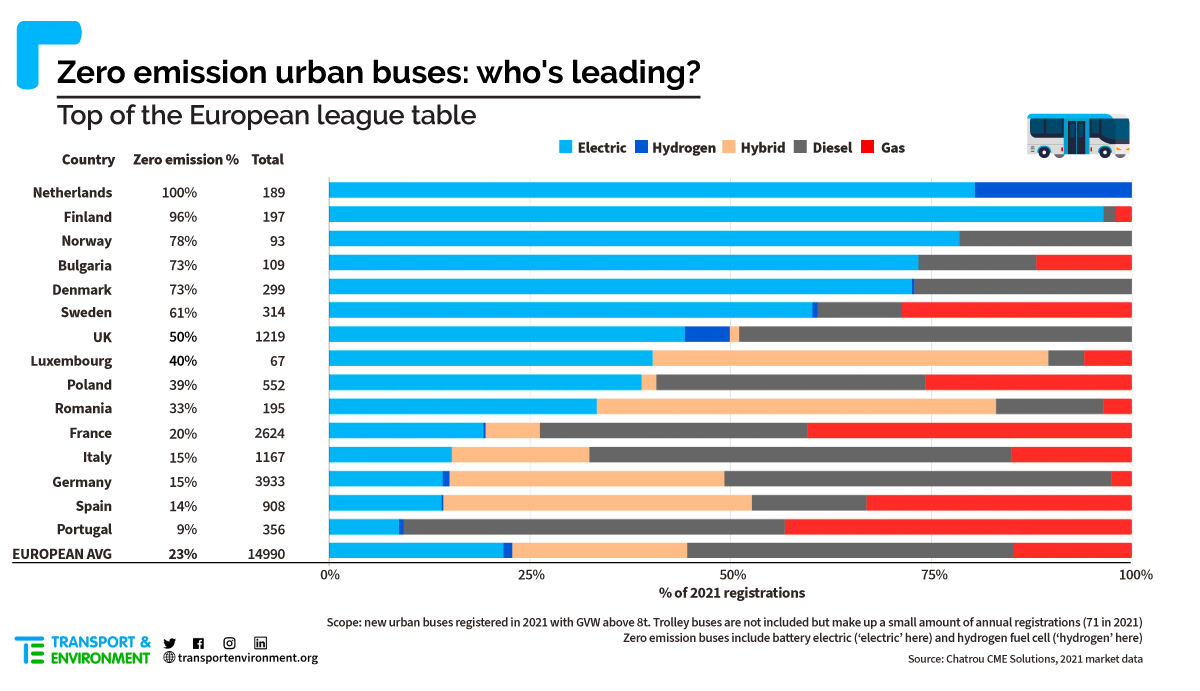 Poland has made tremendous progress, and four out of 10 of its new city buses are now zero-emissions – far ahead of comparable figures for Germany, Italy, Spain and France, where it is not no more than two out of 10.

At the bottom of the ranking are a handful of countries that have yet to emerge from the starting blocks for the deployment of zero-emission buses, including Austria, Czechia, Slovakia, Croatia and Estonia. 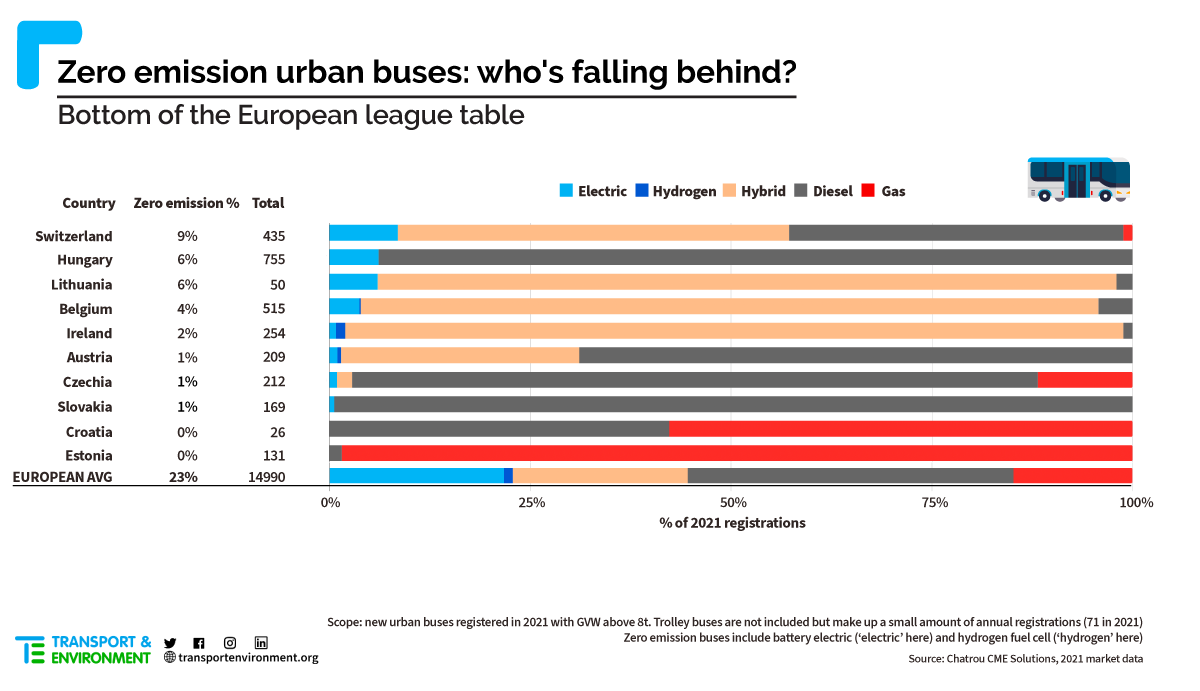 Electric and hydrogen are the two zero-emission powertrains. Electric dominates with 22% of all new registrations while hydrogen accounts for 1%.

In London, which is decarbonizing the largest fleet of city buses in Europe, 90% of journeys will switch to battery electricity with overnight charging.

For the remaining 10%, the choice is between battery-powered buses recharged at a small number of stops along the way (“opportunity charging”), a greater number of electric buses (some of which are recharged in outside peak hours) or hydrogen, according to Transport for London.

Despite the significant progress made on zero-emission buses, there is still a lot of work to be done. Some 77% of new city buses in Europe are still either entirely fossil fueled (40% diesel) or overwhelmingly fossil fueled (22% hybrid and 15% gasoline).

Europe is getting out of gas – except in France

Across Europe, new registrations of zero-emission buses outnumber petrol, but in France the reverse is true. (France registered more than 1,000 new gas buses, compared to just over 500 new electric buses).

Italian market data for 2021 could signal a move away from gas, where newly registered electric buses outnumbered gas for the first time last year.

In countries going electric, adoption is being facilitated by a growing awareness of lifetime costs or “total costs of ownership”. Simply put, the initial purchase price of electric buses is usually higher than that of diesel, gas or hybrid, but the daily energy and maintenance costs are lower, which means that buses electric ones cost less throughout their lifespan.

However, there are significant variations from year to year, with the major players regularly swapping places.

To the European Commission

Seeing the strong growth in demand, some bus manufacturers are stepping up their efforts, with Daimler and MAN pledging that all their new city buses will be zero emissions by 2030.

California, a cornerstone of EU car policy, has legislated that all new city buses must be zero emissions from 2029.

To address air quality, the climate emergency and high demand, we urge the European Commission to ensure that all new city buses are zero emissions from 2027.

The main takeaway is that the supply of zero-emission city buses will fail to meet demand without EU lawmakers stepping in on the upcoming regulation. The European Commission’s proposal is to be published on November 30.