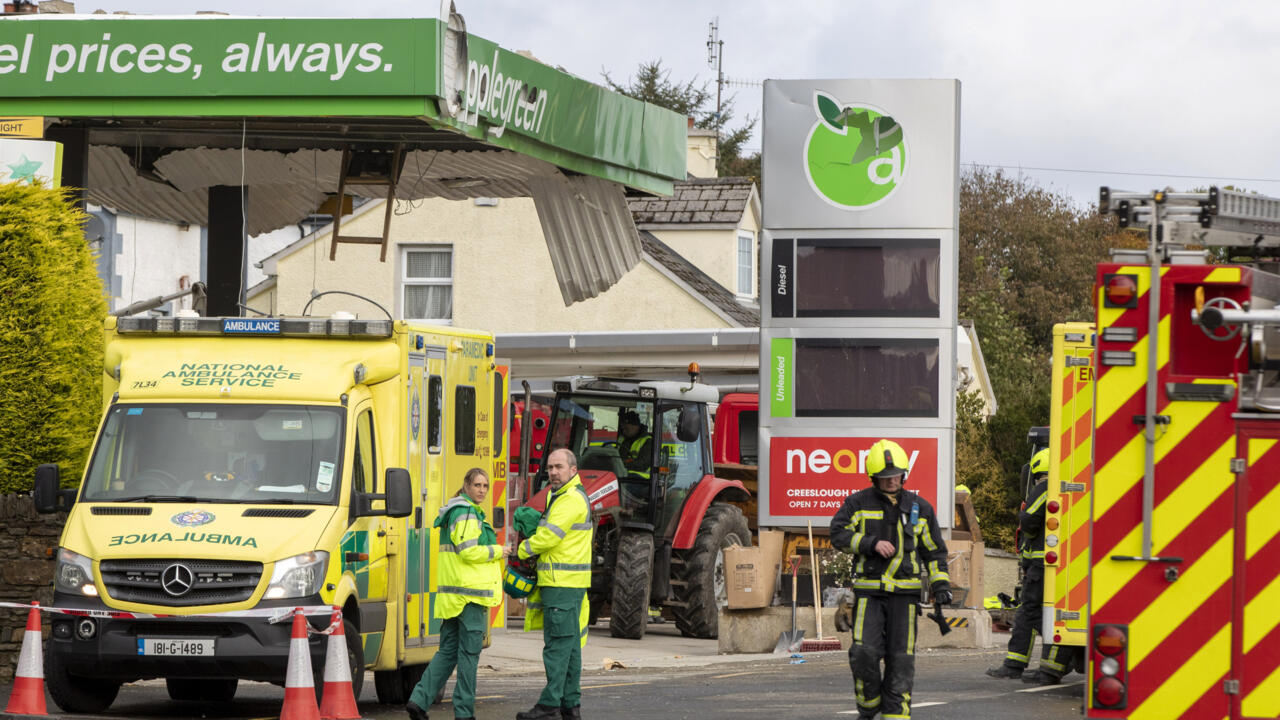 Creeslough (Ireland) (AFP) – At least nine people have been killed in an explosion at a petrol station in County Donegal, in the northwest of Ireland, police said on Saturday.

Garda Siochana police said eight people had been hospitalized and they “can now confirm nine deaths as a result of this incident”.

“The search and recovery of new fatalities continues” at the Creeslough village site,” he said.

The cause of the blast remained unknown and police had yet to announce the launch of an investigation as the search through the rubble continued.

The death toll from Friday’s explosion had already risen from three to seven overnight.

Rescue efforts by the Irish emergency services continued through the night after the blast tore through the forecourt of a petrol station and a nearby apartment complex.

An aerial photograph taken after the explosion shows the destroyed gas station building.

Two two-storey residential buildings behind had collapsed, while the facade of a similar adjacent building had been blown away.

Resident Kieran Gallagher, whose house is about 150 meters (500 feet) from the scene, said the explosion looked like a “bomb”.

“I was at home at the time and heard the explosion. I knew straight away it was something, it was like a bomb going off,” he said at the BBC.

During a service at the local church on Saturday morning, Father John Joe Duffy said the community had been hit by “a tsunami of grief”.

Many emergency service vehicles remained at the scene overnight, including fire services from both sides of the border with British-controlled Northern Ireland.

The Gardai and Civil Defense were also involved, and a Coastguard helicopter airlifted some of the injured from Letterkenny University Hospital to the capital Dublin.

The university hospital, about 24 kilometers from the explosion, was placed in a state of emergency to deal with “multiple injuries”, it said in a statement.

Irish Prime Minister Micheal Martin said his “thoughts and prayers today are with those who lost their lives and those who were injured in the devastating blast”.

“The people of this island will be numb to the same sense of shock and utter devastation as the people of Creeslough at this tragic loss of life,” he said.

Martin thanked the members of the emergency services who worked non-stop “in extremely traumatic circumstances”.

Agriculture Minister Charlie McConalogue, who represents North East Donegal in the Irish Parliament, compared the scenes to events in the decades-long sectarian dispute on the island of Ireland over British rule in Ireland North.

“The scenes from the event are reminiscent of footage from The Troubles years ago, in terms of the scene on the ground, damage and debris.”

Creeslough is about 30 miles (50 kilometers) from the border with Northern Ireland and has a population of around 400 people.

The Applegreen service station is on the N56 road, which circles the northern tip of the Republic of Ireland.

Applegreen tweeted that the news was “devastating”.

“Our thoughts and prayers are with the families and friends of those who died, those who were injured and the wider Creeslough community,” the company said.

“This tragedy is a terrible blow to a community that is very close-knit and where every loss and hurt will be felt by every member of the community and far beyond,” he said.