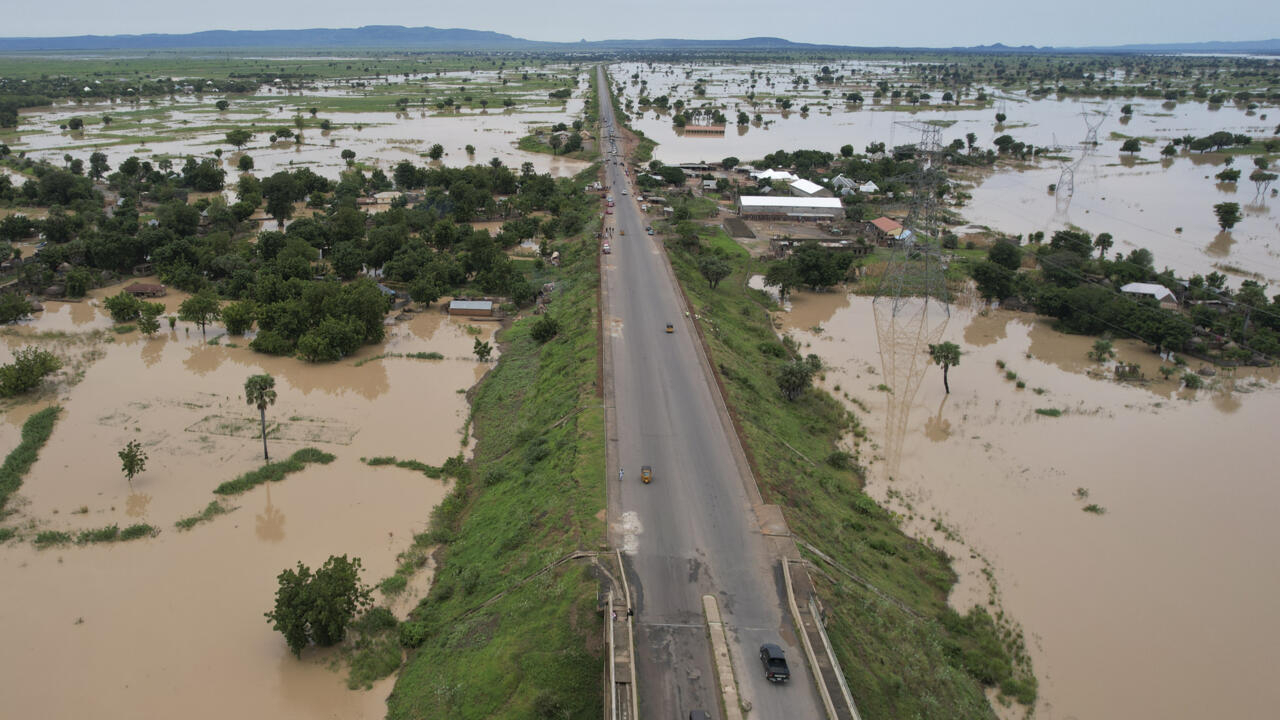 Abuja (AFP) – Usman Musa had spent more than $1,300 on his 10-hectare paddy field in Nigeria’s Kogi state, now in the grip of the country’s worst floods in a decade.

In a wooden canoe, the 38-year-old father of four paddled through the troubled waters, passing his home and that of his relatives, the local hospital and school.

Only the roofs were visible.

Across Africa’s most populous country, communities and crops of sorghum, maize, rice and vegetables are under water, with farmers and aid workers warning of a possible food crisis.

The country, home to more than 200 million people, was already struggling with high inflation and worrying levels of food insecurity.

Now the situation will get worse, with nearly 110,000 hectares (272,000 acres) of farmland completely destroyed by flooding since August according to the latest government figures.

“The floods are still ongoing but we can say with certainty that between 60 and 75 percent of the yield we expected is going to be lost,” Kabir Ibrahim, president of the All Farmers Association of Nigeria, told AFP.

“It’s monumental. So many people are crying.”

More than 600 people have died and 1.3 million others have been forced from their homes according to the latest figures given by Minister of Humanitarian Affairs Sadiya Umar Farouq.

Floods are not uncommon in Nigeria during the rainy season from May to November, but they have been extreme this year.

Officials and residents blame climate change, but also poor planning and excessive discharge of water from dams, a process intended to ease the pressure.

“If you don’t open the water through the spillways, then the dams will break,” Ibrahim said, and then “it would be like Pakistan. All of Nigeria would be under water like Pakistan.”

Farmers were warned in advance, but that was not enough.

“We used forecasts and avoided planting along flood-prone areas,” Ibrahim said, “but now you can see the devastation is everywhere.”

As a result, Ibrahim, whose organization represents 20 million farmers, believes “there will be more difficulties towards the end of the year and the beginning of next year”.

Year-on-year food inflation was already 23.3% last month, partly due to the ripple effects on the import-dependent country of the coronavirus pandemic and the Russian-Ukrainian war.

The World Food Program and the Food and Agriculture Organization of the United Nations (FAO) said last month that Nigeria was among six countries facing high risk of catastrophic levels of hunger, even before the floods. .

Now, “the impact of the floods on food production is a real threat to the country and could lead to a major food crisis,” said Hussaini Abdu, Nigerian director of the charity CARE.

The FAO representative in Nigeria, Fred Kafeero, said he was “deeply concerned” as food supplies were expected to be low “due to the anticipated reduction in household production”.

The aid official said the floods were also affecting livestock and had increased the risk of outbreaks of vector-borne diseases such as cholera.

The floods not only destroyed agricultural land, they also impeded truck transport and damaged roads and bridges, further increasing pressure on food supplies.

“We were hoping inflation would take a break with the (upcoming) harvest, but now with the floods it puts a big question mark on our inflation forecast,” said Ari Aisen, IMF resident representative for Nigeria.

“It looks very serious but it’s hard to judge at this stage,” he told AFP, adding that while it was early to assess, “there is an upside risk of inflation, rising food prices”.

The last massive floods in Nigeria in 2012 cost nearly $17 billion, according to the World Bank.

While immediate aid is now needed, the International Monetary Fund has said it will be cheaper to invest in preventive measures and policies.

Countries should invest to “help people adapt to these types of events rather than using resources after the fact,” Aisen said.

But in the meantime, the government said it was stepping up support for affected communities.

President Muhammadu Buhari has approved the release of 12,000 metric tons of grain along with a national strategic reserve stock.

But farmers aren’t sure it will be enough.

Buhari restricted the import of rice in 2015, to increase local production and self-sufficiency.

For Ibrahim, the resumption of these imports “should not be ruled out, if the situation becomes serious”.

Weather forecasting agencies have warned that there could be further flooding until the end of November.