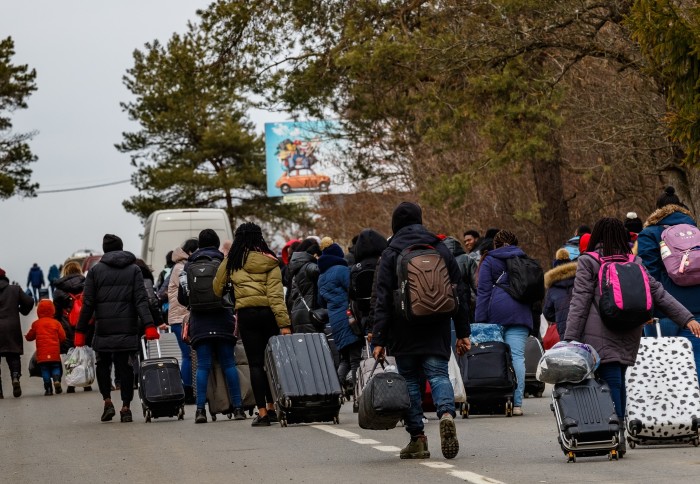 A equipped with studentsteachers and staff from Imperial College Business School have worked with french charity Solidarity Ukraine for create a playbook so that other communities can replicate what a community in Saint-Omer, in the north of France, has achieved since the beginning of March by relocating Ukrainians currently displaced by war.

The charity is led by the Imperial College Business School Advisory Board and Imperial Council Member Mary Meaney, who has been at the forefront of the effort. sustain Displaced Ukrainians in Saint-Omer, about sixty kilometers from Lille.

Mary worked with the Imperial team to create the guide and lead a local effort that includes hundreds of volunteerswhile housing dozens of displaced Ukrainians at her home in France, including 11 orphaned children.

The toolkit – titled Solidarity Ukraine: A Guide to Welcoming Ukrainian Displaced People – provides sound and practical advice on how community leaders can best manage the arrival and resettlement of Ukrainians.

Professor Alice Gast, President of Imperial College London, said: “As part of our response to the crisis in Ukraine, students and staff at the business school have worked hard and quickly with Solidarity Ukraine to develop this commendable guide.

“It is a tremendous piece of work that defines the best approach for a community to take in coordinating integrated and holistic support for displaced Ukrainians, and also contains key documents in French and Ukrainian.”

She said: “Mary’s leadership and dedication throughout this crisis has been inspiring, and I applaud her for spearheading the creation of this important guide. I worked alongside three amazing Ukrainian students from the Business School for codify and organize what the group of Saint-Omer discovered How? ‘Or’ What come together to support, feed, clothe, house, employ, educate and provide health care to the influx of Ukrainians flee the country. My role was secondary Mary and the students star shows, and deserve absolute congratulations for their tireless efforts.”

Mary Meaney said: “As leader of the Solidarity Ukraine initiative, I am deeply grateful to Celia, Marina and the entire Imperial team for their incredible work.

“So far, our community in northern France has welcomed over 250 Ukrainian women and children, and this guide will be invaluable as we scale up our support for other Ukrainians in other communities across France. As a member of Imperial College Council and also the Imperial College Business School Advisory Council, I am very proud of Imperial’s contribution to this crisis.

The guide offers a range of training materials for those who want to mobilize their communities to support Ukrainian women and children.

It also contains details on how to match and host Ukrainian families and support those suffering from trauma, and examines the practicalities of ensuring refugees receive essentials, such as clean clothing, toothbrushes, shampoo, clothes, baby equipment, diapers. as well as access to computers to communicate with family and friends.

Since the beginning of March, Solidarité Ukraine has been working with the community of Saint-Omer to welcome hundreds of Ukrainian women and children, and has found solutions to house, feed, clothe and care for them.

All Ukrainian primary and secondary school children who arrived in March are now in French schools, and teens and adults are taking French lessons offered in person four days a week, with additional online lessons.

Upon arrival, every Ukrainian underwent a full medical check-up, including a check on the status of vaccinations, chronic illnesses and psychological status, and had access to medical care. The Saint-Omer team also includes 60 Russian-speaking and Ukrainian psychologists providing mental health support.

Other efforts included the submission of all French documents for Ukrainian families to receive their protected status and a new “bus stop” in front of the Ukrainian reception center with free transport for all Ukrainians.

The community also organized a range of activities, including French classes, art classes and sports competitions.

Imperial has worked with Solidarité Ukraine to create the guide to capture the lessons of the Saint-Omer community’s experiences in dealing with the refugee crisis so far.

It is expected that the guide will be used by other communities seeking to replicate the model used in Saint-Omer. A version of the guide for use in the UK is also planned.

The news follows the launch of new funds to support refugees and asylum seekers at Imperial. Mary Meaney, along with other board members and senior executives at Imperial, were among the first to pledge their support, which currently stands at almost £250,000 in donations and Imperial funding .