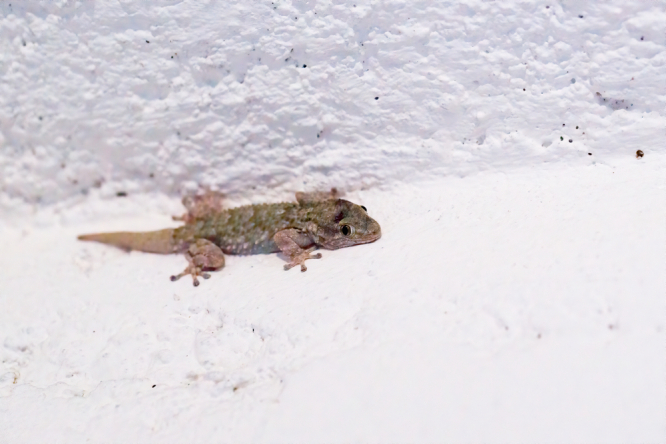 The gecko population in the southwest of France has exploded this year due to the hot summer, prompting an environmental association to launch an official count of one species of gecko in particular.

The ‘Tarentola mauritanica’, or ‘Taranto’ is a type of gecko, a small lizard – adults can reach 15 centimeters in length – that are usually seen further south in the Mediterranean. It is now increasing sharply in Bordeaux and its surroundings.

In response, the environmental association Cistude Nature has launched a campaign to survey and raise awareness of the species, in partnership with the town hall of Bordeaux Métropole.

Residents are encouraged to watch the geckos and share their sightings. It is hoped that this will help the association to follow the animal more closely, and to measure the consequences.

More noticeable in the past two years

This species of gecko was first seen in Bordeaux in the early 2000s, but its numbers have increased significantly over the past two years. The association has grown from receiving around 15 reports in 2021, compared to around 120 this year so far.

“Over the past few years, we have collected a lot more data,” said herpetologist (reptile and amphibian expert) and campaign coordinator Matthieu Berroneau, 20 minutes away. “It shows that the species is becoming common very quickly here.”

The association is now set to see if there is a link between high temperatures on city streets this summer and the proliferation of the ‘Taranto’ species.

“Geckos like warm climates, and their presence is a clear indicator of rising heat and warming,” Berroneau said.

After the hot summer across France, the gecko has been increasingly reported in areas around the Garonne.

Mr Berroneau said: “We have an increasingly precise map of the distribution of the species. We see that it followed the main axis of the Garonne. He colonized Toulouse, Villeneuve-sur-Lot, Marmande, Agen and Bordeaux. This is quite logical, as the climate around the Garonne is quite similar to that of the Mediterranean.

“It is also anthropophilic, that is to say it is very close to humans, and is often introduced by humans, by climbing on freight trains for example.

“It’s also the great fashion for olive trees – everyone wants an olive tree in their garden – which arrive from the Mediterranean regions, and it is often a refuge for geckos. Now that the climate is more favourable, chances are it will continue to grow here.

Geckos look like small lizards, but have a “more flared shape…and suction cups at the end of each leg,” says Berroneau.

“These are micro-hairs that allow it to climb even on smooth surfaces, such as windows. It comes out mainly at night, when it becomes lighter, almost white. It is often seen on walls, chasing butterflies near lamps, especially on hot summer nights.

“During the day, it is rather dark, which allows him to warm up in the sun.”

Mr Berroneau said overall the gecko should not cause “a long-term problem” as it “colonizes an area that is currently [otherwise] empty of reptiles”.