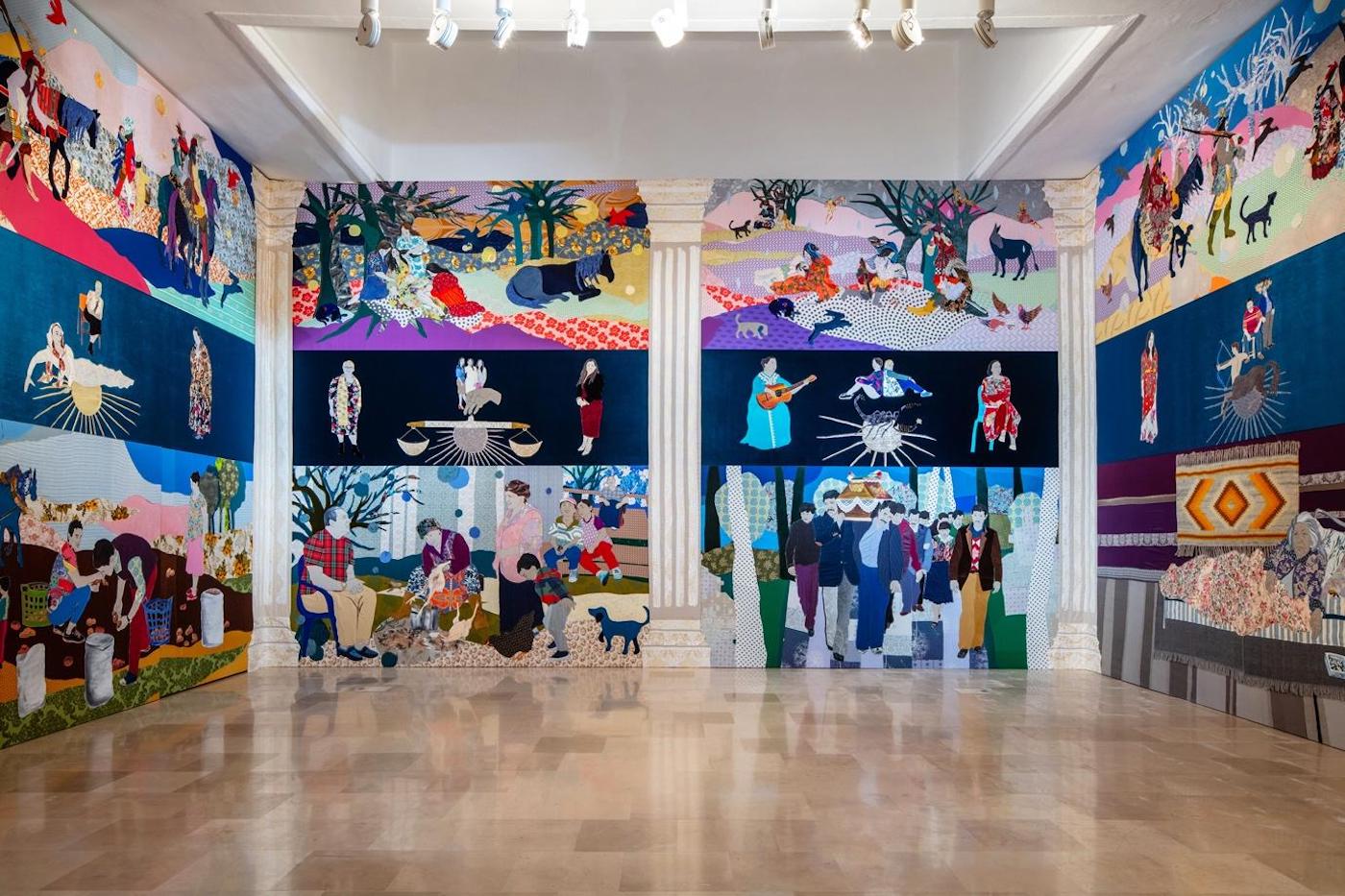 The Polish pavilion is no exception. For the first time in its history, a Roma woman, Małgorzata Mirga-Tas, has been selected to exhibit in a national pavilion. As a Pole, I cannot overstate the significance of Mirga-Tas representing the country that Roma have called home for nearly 600 years. The history of Roma and Sinti in Poland and Europe is one of marginalization, exclusion, misrepresentation and persecution, culminating in the systematic mass murder of Roma and Sinti during the Holocaust . Given this history, Mirga-Tas’ work inside the Polish pavilion is entering uncharted territory. Its textile installation, Re-enchant the worldrepositions Roma culture within the Western European canon through a narrative that begins in the 17th century and ends with depictions of the Roma community of Mirga-Tas in southeastern Poland.

Mirga-Tas’ work consists of 12 panels, each divided into three horizontal bands. The upper band of each panel is inspired by a series of engravings made between 1621 and 1631, entitled The Gypsies (Gypsies), by French artist Jacques Callot. at Callot The Bohemians offers a visual checklist of stereotypes commonly associated with Roma (describing them, for example, as fortune tellers partially dressed in rags, engaging in “indecent” behavior or stealing cattle; or as “outsiders” whose You must beware). According to Mirga-Tas and the pavilion’s curators, Wojciech Szymański and Joanna Warsza, Callot’s prints are a means of recovering narrative and visual misrepresentations of Roma life and identity.

To solidify the artist’s repositioning of Roma visual culture, Mirga-Tas’ panels mimic the compositional structure of the Hall of months Palazzo Schifanoia frescoes in Ferrara, Italy: three horizontal bands arranged vertically to form a panel, each containing a separate narrative. Twelve signs of the zodiac of the Hall of months frescoes appear in the middle part of the Mirga-Tas panels to emphasize the cyclical nature of time and the odyssey of the Roma. Each zodiac sign is accompanied by striking portraits of mostly Roma women. During an artist talk on June 4 at the Zachęta National Art Gallery in Warsaw, the artist identified some of these women: the first Roma tram driver in Poland, a Roma survivor of the Holocaust, Roma artists and community activists, and her own sister. As necessary and overdue as art historical framing is, Mirga-Tas’ work shines brightest when its individuals are recognizable as specific people, ready to meet our gaze, filling each panel with their presence while confronting age-old prejudices and misrepresentations.

The lower band of the installation takes viewers to the artist’s hometown of Czarna Góra in the Tatra Mountains of southeastern Poland. Leaving the allegorical domain of the upper bands, she presents an intimate look at her community. We witness social gatherings such as a funeral procession, a card game, children playing, women conversing inside a house, people of different generations harvesting potatoes in a field. Examples of domestic work traditionally affiliated with women’s work, such as doing laundry, plucking chickens, or sewing, underscore an issue that Mirga-Tas addressed in her Zachęta speech. She called herself a “minority feminist” and said that being an artist as a Roma woman is not yet a given.

Through a combination of embroidery and needlework, she imbues domestic craftsmanship with a blend of Roma art and history, personal experience and epic tales, with a nod to the “high art” of the tapestry. Her choice of materials for this installation reflects her commitment to her community and the importance of sustainability in the face of fast fashion. Most of her fabrics come from second-hand clothes from her friends, neighbors, family members and local thrift stores. In some cases, the individuals depicted in his panels are made up of their own clothing. And she frequently names her collaborators: her aunt, Stanisława Mirga; her friend, seamstress and activist Halina Bednarz; educator Małgorzata Brońska; and others. The mixture of life and art has rarely been so poetic, so intertwined and so inseparable from the artist and his community.

Mirga-Tas’ approach to creating work worthy of his community contrasts sharply with another of this year’s national pavilions at the biennale, that of Francis Alÿs The nature of the game at the Belgian Pavilion. Alÿs’ collection of short films, which documents children playing in different countries around the world, often in conflict zones, offers an example of the long and difficult road to decolonize parts of the art world. established. The universal message is that, whatever the circumstances, children will always be united in play. This work has been acclaimed by the international art press without ever questioning the power dynamic between the artist, his camera and his subjects.

Re-enchant the world, on the other hand, gives a deep meaning to the concept of community work. However, the progressive spirit that allowed Mirga-Tas to succeed at the biennale is fragile. Will more Roma artists become visible on the national or international scene? Will more artists practice a community-driven approach that eschews outsider gazes and bland generalizations? Will more artists elevate the individual above a narrative about universality? Ultimately, it takes more than one artist to bring an entire community to life. Once the dust of the Venice Biennale settles, I hope that all these communities brought to our attention by Mirga-Tas, Leigh, Boyce, Sedira and others will occupy a permanent place in the art world – beyond beyond trends and gestures of goodwill.

Małgorzata Mirga-Tas’s Re-enchant the world represents the Polish Pavilion at the 59th La Biennale di Venezia International Art Exhibition, on view until November 27. The pavilion was curated by Wojciech Szymański and Joanna Warsza.