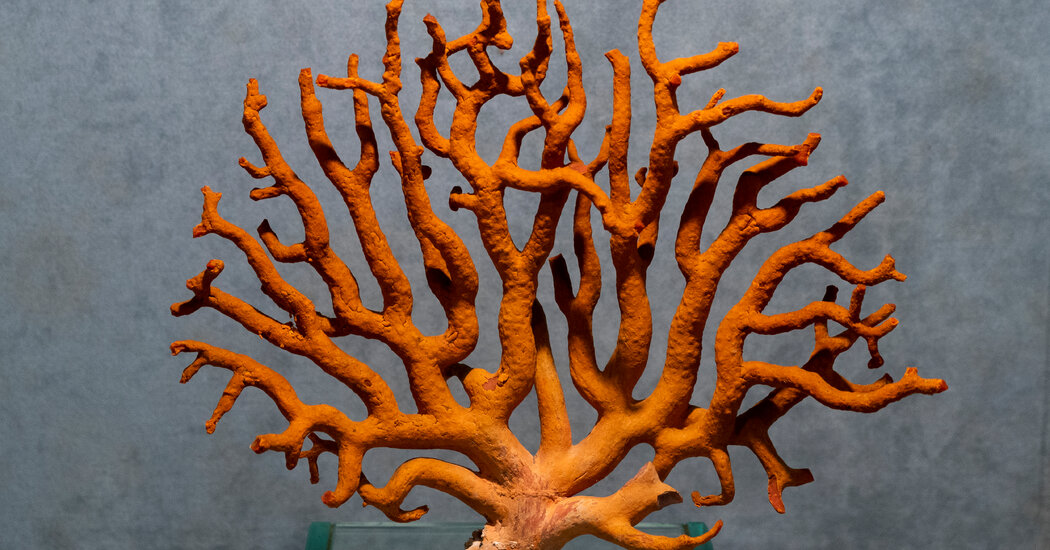 TORRE DEL GRECO, Italy – In the shady suburb of Naples, in the shadow of Vesuvius, between the archaeological wonders of Pompeii and Ercolano, the port town of Torre del Greco has retained its own centuries-old heritage: a singular art with the red coral of the Mediterranean Sea. But the niche jewelry industry now only survives with a fraction of the red coral harvests of the past, as stringent limits have been imposed to protect diminished marine colonies from environmental dangers and help them recover from decades of damage. ‘exploitation.

“We are for these restrictions, because if the coral disappears, we all close,” said Vincenzo Aucella, who runs Aucella Gioielli, a family business founded in 1930 that produces coral jewelry and cameos, the other specialty of the area. city. He is also president of Assocoral, an association representing 70 of the city’s coral companies at local and national levels. “We have to protect the coral and we have to protect the economic fabric of Torre del Greco.” Behind him, display cases contained rows of stands displaying necklaces twisted with coral beads and burgundy-colored branches strung together in necklaces.

From antiquity until a ban in the 1980s, fishermen dredged the seabed of the Mediterranean, indiscriminately collecting marine life in huge nets. Towards the end of the period, remote-controlled vehicles plunged to 330 feet, previously inaccessible depths, to strip coral colonies.

The region’s red coral harvest peaked at nearly 100 million tonnes in 1978 and then declined rapidly. The international fishing treaties drafted by the UN General Fisheries Commission for the Mediterranean now require all countries bordering the sea to fulfill the same mandates, which considerably reduces catches: in 2018, only nine tonnes of red coral were collected. But, say specialists, populations are still struggling to bounce back.

The smaller harvests “are due to all the restrictions, but the coral is there,” said Gioia De Simone, sixth generation owner of Antonino De Simone, one of Torre del Greco’s main coral merchants. It is “a renewable resource, unlike diamonds”.

According to the United Nations, however, the scientific community has found that populations of corals in shallow water, from the surface to a depth of 160 feet, have almost disappeared and that populations in deeper water are significantly reduced compared to to those of previous decades.

Corallium rubrum – red coral, also known as precious coral, a separate species from Japanese coral also used in jewelry – could be considered renewable because, unlike most gemstones, it is not a mineral: c he is an invertebrate filled with polyps, a marine animal with an expandable tentacle that hunts zooplankton for food. His body is protected by a shell of calcium carbonate, the formation of which is hampered by today’s environmental changes, preventing its regeneration.

As for the distinctive color of coral, carotenoids – the natural pigment that colors things like carrots, tomatoes, and flamingos – transform its bone structures into pale dogwood pinks, sunset oranges, or arterial reds.

Growing on the seabed in clusters around Sicily, Sardinia and Corsica as well as along the Tunisian, Moroccan and Spanish coasts, invertebrate colonies can live up to 500 years; given their slow-paced underwater existence, it can take a century or more to grow the archetypal forked branches of the coral.

Only a small number of licensed divers are now allowed to harvest red coral, the limit varying by country. And they must select coral branches with a minimum diameter at the base of almost three-tenths of an inch, 30-40 year growth, harvested 160 feet or more.

Softer and more fragile than other gemstones, red coral is primarily cut into cabochons or pearls, or expertly carved into more intricate designs, especially cameos (which can also be made of hard stone like the onyx and agate). The skill of the craftsmen of Torre del Greco with this difficult material has perpetuated its reputation as a jewelry center for centuries.

“My father instilled in me the passion for this unique craft of Torre del Greco,” said Vincenzo Mazza, a cameo engraver, “and I sought to instill the same passion in my son.”

Three generations of Mazzas – Gennaro, 82 years old; Vincenzo, 53 years old; and Luca, 21 – were dressed in blue handmade blouses and house slippers, and sat side by side on a long plywood work bench in the family apartment. They incise conch shells with delicate three-dimensional patterns less than a fifth of an inch deep, like carving the surface of an eggshell.

The first coral jewelry and sculpture factory in Torre del Greco was founded in 1805 by Paul BarthÃ¨lemy Martin, who arrived from Marseille, France, where the coral industry was in ruins after the French Revolution. After centuries of delivering coral to Livorno, Genoa, Trapani and other Italian towns in the jewelry trade, local sailors began to bring back ship cargoes for the town’s own industry. And while the men took fishing trips lasting several months, women quickly became the main work force, working the material at home – a domestic tradition carried on by artisans like the Mazza family today.

In 1881, the New York Times reported that “almost all of the vast production of the Mediterranean is brought to this city,” and a third of its 30,000 inhabitants at the time were employed in the coral trade. Fishing boats, called “coralline”, stopped leaving the port decades ago, but coral processing and jewelry making companies have remained. Today, they employ around 1,500 of the city’s 82,000 residents.

Coral continues to play a major role in the economy of Torre del Greco. While there are no current estimates of its commercial value, a 2014 tally from the University of Naples Federico II calculated its value at $ 82 million.

In Ms. De Simone’s business, artisans transform powder-coated branches into shiny pearls and cabochons, as well as cameos, signet rings and pendants. â€œEach piece is selected and crafted by trained eyes and hands,â€ Ms. De Simone said as she displayed a chain of pink coral beads carved in the shape of delicate strawberries.

The branches, delivered in raw form directly to fishermen, are bought for between several hundred euros and several thousand euros per kilo, she said, but their real value only becomes apparent when artisans clean and work the material, revealing its color and quality. . â€œSometimes you’ve done a lot, sometimes you realize you haven’t,â€ she said. A bead sitting next to her sewed pieces of fiery coral pierced into a choker, and a floral necklace finished with thin scarlet petals sat on a napkin atop her desk.

Raw coral arrives with certifications showing it was collected in accordance with regulations, so Ms. De Simone can assure her customers, which include some of the world’s leading jewelry brands, that all products made from of raw materials at its headquarters are of responsible origin. .

The Food and Agriculture Organization of the United Nations is now in the midst of a red coral study, which is expected to be completed in 2022. Its initial research, begun in 2020, has revealed a species “on the borderline of its survivability, â€said Miguel Bernal, a marine scientist on the project. “But legal fishing is not the main cause of coral problems today.”

The organization is “interested in the whole value chain,” he said. â€œRed coral does not contribute to nutrition, but it does contribute to livelihoods, and there is an intangible benefit in maintaining a tradition that has existed in the Mediterranean for millennia. “

The study explores whether current harvest levels are sustainable, but the reasons for the damage to the marine animal are beyond the organization’s control.

â€œCoral is a sensitive creature, and global warming and the acidification of the seas inhibit the growth of the coral skeleton. said Dr Bernal. â€œWhat we really need is reduced emissions. But it is beyond our reach.

2021-11-22
Previous Post: The Basics of Debt Consolidation: What You Need to Know
Next Post: Farming Simulator 22 launch trailer challenges you to grow your own empire from scratch