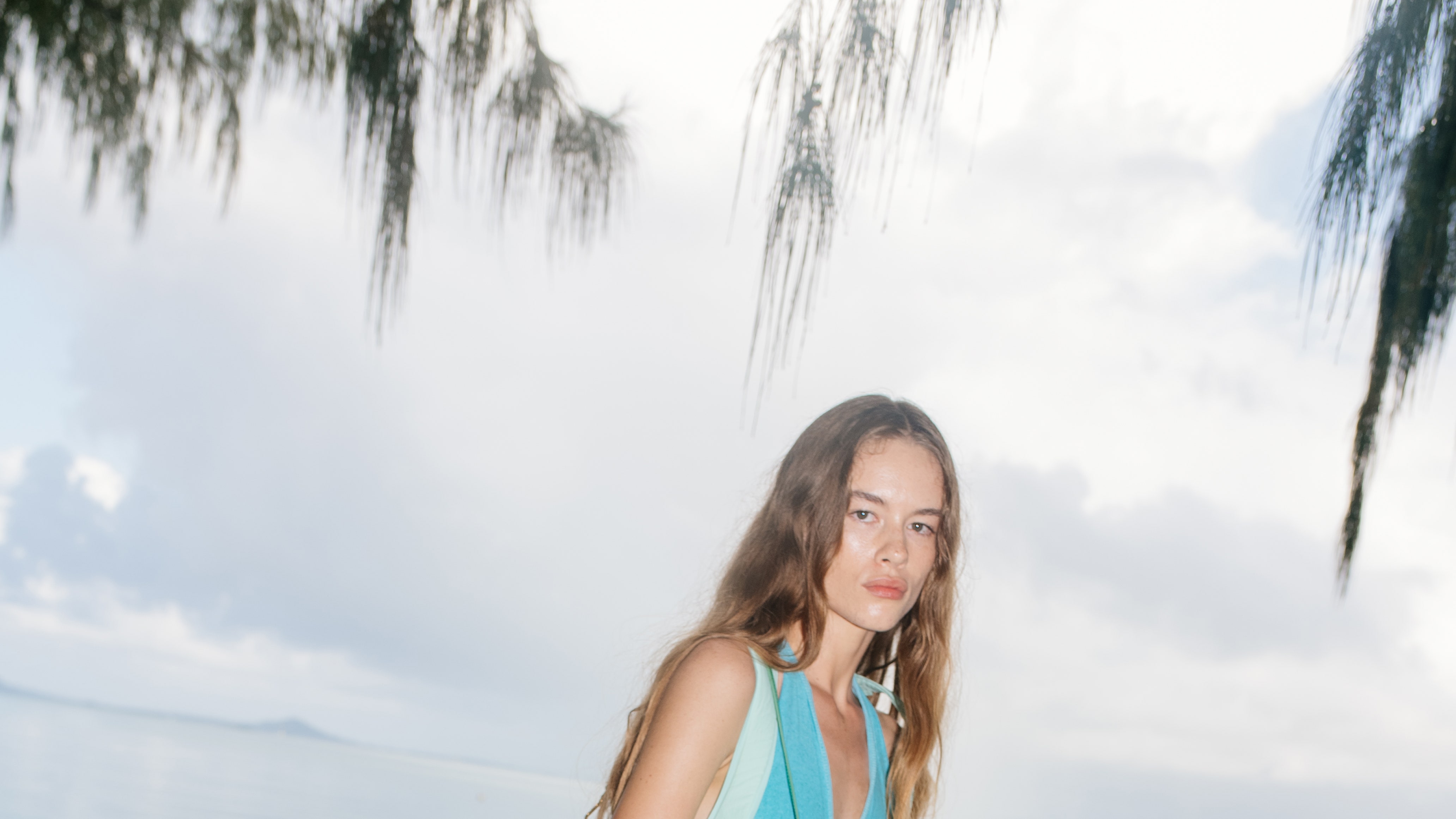 A cobalt walkway crosses the sand of Moli’i Gardens Beach, north of O’ahu. The rain was falling in bucketfuls and the guests were crowding under their black umbrellas. One said the storm, which delayed Jacquemus’ Hawaiian debut by about an hour and a half, could be interpreted as a blessing. When the rain cleared and the show began, a true Hawaiian blessing was performed, giving thanks to the land, the people, and the history of this place. The sun faded into the Pacific, the waves lapped the shore. It was beautiful and peaceful and (thanks to a PR request) no cell phone in sight. Then came fashion.

Sand-colored linen ensembles opened the show, exploding into Hockney blue, shocking pink and inky black swimsuits by the end. The proportions of Simon Porte Jacquemus are intentionally abnormal – one part gathered, another cut out. For Spring 2022, he played with the shapes of scuba gear, cutting and rolling unitards and wetsuits into tailoring. Some of the best dresses and pants have been wrapped around a hip like a sarong, sexy and simple in their appeal. Backless blazers reinforced the idea, although cargo pants and swim shorts from Jacquemus might have a longer lifespan. Elsewhere, he played with a short-over-long style, clothes worn in an illogical order for optimal optical appeal. He also showcased a new beaded collaboration with artist Tanya Lyons designed to look like water droplets.

The decision to take his parade on the long road from France to Hawai’i was a big step for Jacquemus and his brand, one that was not entirely welcomed. For some fashion followers, the choice to hold a destination show in a location linked to colonialism and tourism was a faux pas. But for many Hawaiian guests in the audience, seeing a European designer arrive on the island was confirmation. Along Waikiki’s main thoroughfare, luxury stores abound, yet none of these designers have ever staged a runway show on the island, or perhaps even set foot here.

With the help of Hawaiian born and raised stylist Ben Perreira and creative director Taylor Okata, Jacquemus worked to create a show that honored the Hawaiian community. Only a handful of European Jacquemus employees traveled to the island, and guests were invited only from the Pacific Rim and the continental United States. Each model was local to the South Pacific, and for most it was their first runway. The entire production team was Hawaiian. “Working in fashion, nothing has been as fulfilling as this,” Perreira said before the show.

“It’s time to talk about something else,” said Jacquemus of his choice to present his collection outside of France. “I think the Jacquemus woman is not French, she is a sunny person. This is the very essence of the brand: sharing, sun, love and family. The Jacquemus woman and man are also ironic, using a diving snorkel as a handbag handle or wearing a leather buoy as an accessory. With this irreverent pop point of view comes a dash of sincerity, which helps make Jacquemus’ high-end humble clothing so popular among Millennials and Gen Z fans. It’s noble fashion with a friendly face.

But after such an explosive show, well, what else to do but change? “This is my last Pop collection,” he said. “Next season I’m going back to something super-feminine, a new part of the Jacquemus identity.” It will be exciting to see where Jacquemus and his community of friends and collaborators go next, but it might be worth lingering a moment longer in the halo of such a successful outing in such beautiful light.