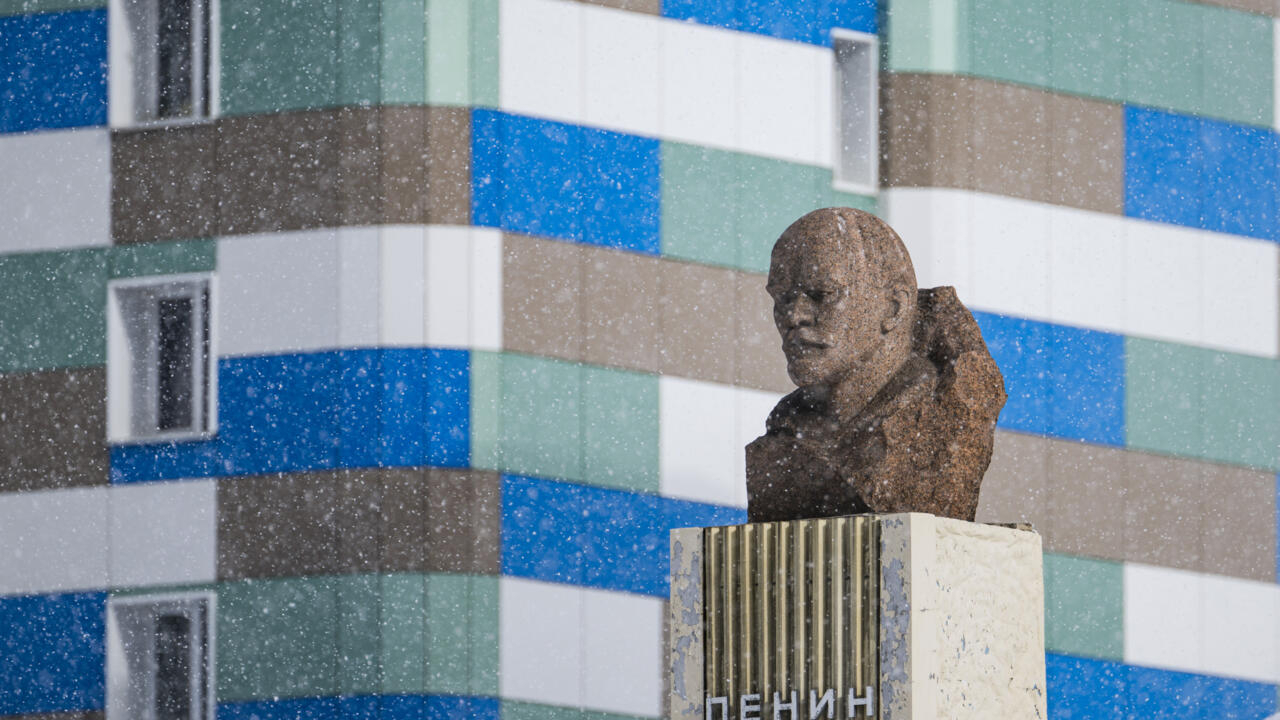 Barentsburg (Svalbard) (AFP) – Russian flags flutter in the polar breeze, a bust of Lenin rises from the snow, and a sweeping slogan declares: “Communism is our goal!”

No, this is not a Soviet colony lost in the arctic deserts, but a corner of Norway where Moscow can, at least in theory, mine, build, drill and fish whatever it wants.

Welcome to Spitsbergen, the largest island in the Svalbard archipelago and “NATO’s Achilles heel in the Arctic”.

These spectacular islands of glaciers and mountain peaks halfway between Norway and the North Pole are a strategic and economic beachhead not only for Moscow but also for Beijing.

It’s all because of one of the most bizarre and misunderstood international treaties ever made, which gives Norway sovereignty but allows citizens of 46 countries to exploit the islands’ potentially vast resources on an equal footing. .

That’s why 370 Russian and Ukrainian miners from Donbass work in Barentsburg, a cut-off corner of Spitsbergen where the Soviets mined coal for decades and where it’s dark for nearly three months of the year.

“Spitsbergen has been covered in Russian sweat and blood for centuries,” Moscow Consul Sergey Gushchin said.

“I’m not saying it’s not Norwegian territory but it’s part of Russian history,” he added.

He does not hide that some Ukrainians have left since the Russian invasion in February.

Moscow has long wanted to have a say in the archipelago, which has been the haunt of its hunters, whalers and fishermen since the 16th century.

He also insists on calling the islands by the original Spitsbergen rather than Norwegian Svalbard, the official name since shortly after the signing of the treaty ceding them to Norway in 1920 while Russia was otherwise engaged in war. civil between Reds and Whites.

The nuclear submarines of the powerful Russian Northern Fleet must also pass near the southernmost Bear Island of Svalbard to enter the North Atlantic.

“Russia’s main interest is to avoid a situation (where) others use (the islands) offensively,” said political scientist Arild Moe of the Norwegian Fridtjof Nansen Institute.

To ensure this, they “maintain a reasonable presence and are very attentive to what is happening”, he added.

After failing to gain joint authority over the islands at the end of World War II, Russia is now pushing – with little success – for “bilateral consultations” to lift the brakes on its activities.

But with no road to the capital Longyearbyen, visitors must come to Barentsburg by boat or snowmobile – depending on the season – to admire what was for decades a Soviet showpiece on the western side of the Iron Curtain.

Barentsburg preserves its Soviet relics ‘not because we still have hope for communism, but because we appreciate our heritage – and tourists like to take pictures with them too’, the historian and tour guide says Russian Natalia Maksimishina.

Moscow accuses Norway of using environmental protection to paralyze its ambitions, with Russian helicopter flights being strictly controlled, for example.

“We have started putting nature reserves around Russian sites,” admitted former diplomat Sverre Jervell, the architect of Norway’s policy in the Barents Sea that separates the islands from Norway and Russia.

“Particularly after the end of the Cold War and the collapse of the USSR when Barentsburg struggled to stay afloat.”

It “wasn’t officially” done to reduce the Russians, Jervell said, but in reality that’s what happened. “Of course we had good arguments, the environment is very fragile,” he said.

And Norway was bound by a treaty to protect the nature of the islands. “But we particularly protected the areas around the Russian sites.”

With another Soviet mining operation at Pyramiden, there were actually more Russians than Norwegians on the islands by the end of the Cold War.

Moscow regularly accuses Oslo of violating one of the most important articles of the 1920 treaty which made Svalbard a demilitarized zone.

He protests every time a Norwegian frigate docks or NATO lawmakers come to visit, and is especially wary of the gigantic Svalsat satellite station near Longyearbyen.

On a windy plateau near the Global Seed Vault – a “Noah’s Ark” where 1,145,693 seed varieties are frozen in case of disaster – some 130 antennae covered by giant golf ball domes communicate with space.

In January, one of the two fiber optic cables connecting Svalsat to the mainland was mysteriously damaged.

Russia has also been accused of taking liberties with the treaty, such as when its then Deputy Prime Minister Dmitry Rogozin – who had been sanctioned by Europe for annexing Crimea – showed up to unexpectedly in Svalbard in 2015.

Or when Chechen special forces stopped there the following year on their way to a military exercise near the North Pole.

“Svalbard is sensitive to the general international climate,” Norwegian analyst Moe said. “It’s a place where Russia can easily express its displeasure by putting pressure on Norway.”

Svalbard is “NATO’s Achilles heel in the Arctic”, said James Wither, a professor at the George C. Marshall European Center for Security Studies in Germany, because its remoteness from mainland Norway and “its particular legal status offer a range of possible pretexts”. for the Russian intervention.

“While the danger of direct military confrontation remains low, Svalbard is particularly vulnerable to a Russian gamble that offers the strategic payoff of advancing Russia’s long-term goals of dividing the West and neutralizing NATO.” , the former British Army officer wrote in 2018.

Norway is trying to play down Russian grievances, saying they are far from new and insisting that its sovereignty over the islands is no different from any other part of its territory.

Praised for his relations with his Russian counterpart Sergei Lavrov when he was foreign minister between 2005 and 2012, Norwegian Prime Minister Jonas Gahr Store is an apostle of Oslo’s “High North, low tensions” doctrine.

“I wouldn’t say we are being tested,” he said, “but there is growing interest in the Arctic from countries near and far.”

“We want to see the communities of Svalbard develop in terms of new activities, research, (and) tourism… and this will be done in a transparent way,” he added.

However, Norway spent 300 million crowns (33.5 million euros) in 2016 to buy a huge estate near Longyearbyen, the only one in private hands in the archipelago.

Russia was quick to play on fears of the arrival of new powers like China.

“If we leave Spitsbergen, who could come in our place? said Russian consul Gushchin from his impressive residence on a hill overlooking Barentsburg. “It could be China for example, or the United States or any member state of the Spitsbergen Treaty.”

Like its high-latitude neighbors Greenland, Iceland and the Faroe Islands, Svalbard appears to be in China’s sights. Indeed, it now defines itself as a “near-Arctic” state and wants to establish a “polar silk road”.

As the region warms three times faster than the planet, melting sea ice is opening up economic opportunities and shipping routes, though some are more theoretical than real.

With new fishing grounds and easier access to potential resources like oil and gas fields, everyone is trying to get their foot in the door.

It’s hard to miss the Chinese Institute of Polar Research in Ny-Alesund, the third-largest settlement on Spitsbergen, a former mining community now devoted to international science.

Two marble lions – symbols of Imperial China – guard the entrance to the Norwegian-owned building, known as the Yellow River Station to its occupants.

This is a blatant example of the “flag being shown”, according to Torbjorn Pedersen, a political scientist at the University of Northern Norway in Bodo.

“Some foreign capitals…have established their presence there as national stations and strategic strongholds, potentially giving them political power and influence on the islands and in the wider Arctic region,” he said. -he wrote last year in the Polar Journal.

“Some of the research presence in Svalbard may seem geopolitically driven,” Pedersen added.

“If consolidated, the strategic presence could potentially embolden some…including major powers, with regional aspirations and become a real security challenge for the host country, Norway.”

Oslo takes a dim view of “scientific diplomacy” more suited to Antarctica than to a sovereign nation.

In 2019, he began trying to discourage the idea of ​​national research stations from which countries could fly their flags in favor of sharing research facilities.

The Franco-German station seems to be the first to feel the change. Since 2014, Paris and Berlin have been trying to centralize researchers dispersed over several sites in a new building, but they have come to nothing.

In private, the Norwegians say they do not want to set a precedent.

“We can’t allow the French to do one thing and refuse the Chinese,” Jervell said. “The principle of the Svalbard Treaty is not to discriminate.”