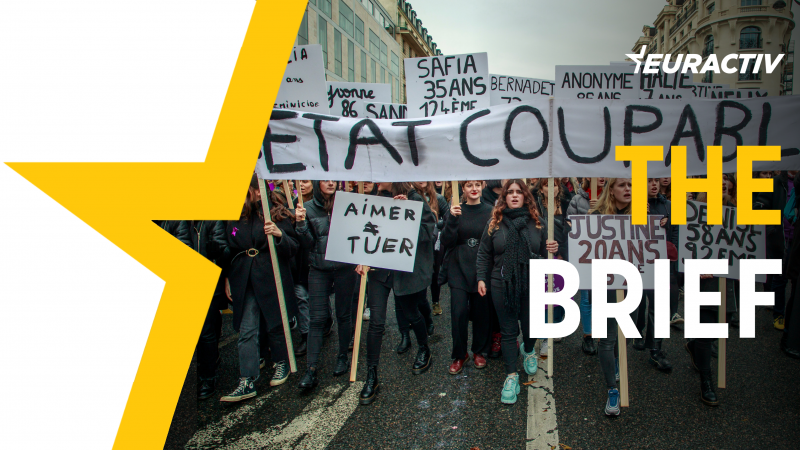 It all started with a photo posted on Twitter in March 2016.

Eight French deputies, all senior leaders of their respective parties, put on lipstick to condemn sexual violence against women. #MeToo wasn’t a thing yet.

Hours after the photo was published, several women accused Green MP Denis Baupin (second from left in photo) of sexual misconduct. They couldn’t bear to see the gap between public communication and private reality. He retired from public life a month later.

What Baupin and his accusers did not know at the time was that these revelations would show just how badly cases of sexual violence were being handled in parties across all political stripes and, until now, how policy changes are urgently needed.

Sexual harassment and predatory behavior are tools for men to assert (and abuse) their power.

However, five years after the revelation of the #MeToo movement, almost nothing has changed in France. Just before the summer, Damien Abad, then Minister of Solidarity, was accused of rape by several women. His mandate was interrupted in July, after only a few months and despite his denials.

The latest sex abuse scandals that have rocked French politics, both within Emmanuel Macron’s government and the left-wing opposition parties, have shown how crucial a political response is – and how unable we are to to implement it.

Too often, women in political parties don’t have the space to talk about their traumas or warn others about men’s misconduct.

Creating dedicated safe spaces (protection “units”, as the French call them) within political parties is a great first step. Their status and complete independence from political interference must be guaranteed – with clear channels to raise serious concerns with party officials and, if necessary, the police.

However, this is not enough.

Green Party leader Julien Bayou has resigned after it was revealed his ex-partner had accused him of psychological abuse, a criminal offense in France and an infraction ex officio in many others EU states, although she has not filed a criminal complaint.

Green MP Sandrine Rousseau revealed the accusations on TV after saying she met the woman who was very depressed and attempted to kill herself shortly afterwards.

Bayou in turn accused his ex of harboring resentment towards him, and although he admitted it was a “painful and difficult breakup”, he denied any abuse.

To turn to the media out of anger and exhaustion against a patriarchal system when women feel that no other institution is on their side is more than understandable.

But it also shows a great weakness in the system where women feel they cannot trust the police or the justice system. These systems need to be strengthened to enforce ex officio offences, ensure prosecutions and follow through on convictions when someone is found guilty.

Training on the detection and reporting of misconduct and sexual abuse between colleagues and peers is also essential at all levels.

MPs and their advisers, politicians and simple supporters must undergo such training, and have it repeated – once is not enough. This is all the more crucial as power games and personality cults within political parties artificially raise the threshold after which it is “acceptable” to speak out.

Protection hubs need to be strengthened to ensure both independence and equal access for victims to psychological and legal support. Where such centers do not exist, an independent third party institution that handles complaints of sexual violence should be established.

The French High Commissioner for Equality has proposed giving this new institution powers to investigate the past of new parliamentarians.

And that’s where the money comes in: the issue of sexual violence is underfunded, and the plea by French feminists for a billion euro funding for sexual violence services is the bare minimum. . These services also need more staff and higher salaries to help increase their reach.

Money also needs to flow into the justice system to have the necessary means, such as dedicated courts or free psychological support, to make women believe that they can file a complaint and be taken seriously by the system.

But more importantly, more than any hub, budget or reform, we need to eradicate the toxic culture that views women as sex objects or inferior beings who can be bullied and denigrated. Moreover, these men must know that their actions will have lifelong consequences, including criminal prosecution and total ostracization from the political sphere.

It’s a matter of political integrity and, more often than you think, life and death. We owe it to the #metoo movement.

Today’s edition is powered by NGVA

With escalating gasoline prices, economic dislocation in the transportation sector is inevitable.

Trucking companies should not be discouraged from considering cleaner fuel alternatives to diesel, such as bioLNG. Limiting the growth of biomethane production is the antithesis of the EU Green Deal and its ambition to accelerate the decarbonisation of the transport sector.

EU lawmakers held their first policy debate on the AI ​​law on Wednesday, October 6, with the discussion moving on to more sensitive topics like the highly controversial issue of biometric recognition.

Chinese companies are concerned about the impact of the EU’s Corporate Sustainability Directive on their business operations and have called for a review of the proposed rules which aim in part to tackle human rights abuses in China.

Despite EU efforts to increase cereal production by relaxing environmental rules, the area devoted to cereal production has fallen below the five-year average and production is expected to decline significantly, according to the European Commission.

Trust in the European Union is “clearly progressing” among French people, although many, particularly in the right-wing camp, still want Paris to have more power than the EU, according to a major opinion poll.

Meanwhile, the European Parliament on Wednesday voted on a resolution to tackle energy prices, including the relaunch of the MidCat gas pipeline linking Spain to France, despite opposition from French MPs.

A Russian missile demolished a building in a Ukrainian region that Moscow says it has annexed on Thursday, killing at least one woman, as the Ukrainian army continued its campaign to reclaim land in the south and east.

In an exclusive interview, French Minister for Solidarity Jean-Christophe Combe spoke to EURACTIV about the European social emergency, including social benefits, disability, the war in Ukraine and the European minimum income.

And in response to the Nord Stream pipeline leaks, the European Commission has pledged to strengthen the protection of undersea internet cables through a five-point plan to improve critical infrastructure.

The European Commission will present a communication on fertilizers as part of efforts to tackle the disruption caused by the war in Ukraine, but this falls short of the European strategy on fertilizers that stakeholders are calling for.

The Maltese government must take action to protect media freedom and step up investigative efforts into the 2017 murder of journalist Daphne Caruana Galizia, the Council of Europe has said.

The UN Human Rights Council has rejected a Western-led motion to hold a debate on alleged human rights abuses in China’s Xinjiang region after a UN report revealed possible crimes against humanity.

Finally, don’t forget to check out this week’s Economic Brief: A drop of 200 billion euros to break the camel’s back?

The views are those of the author.