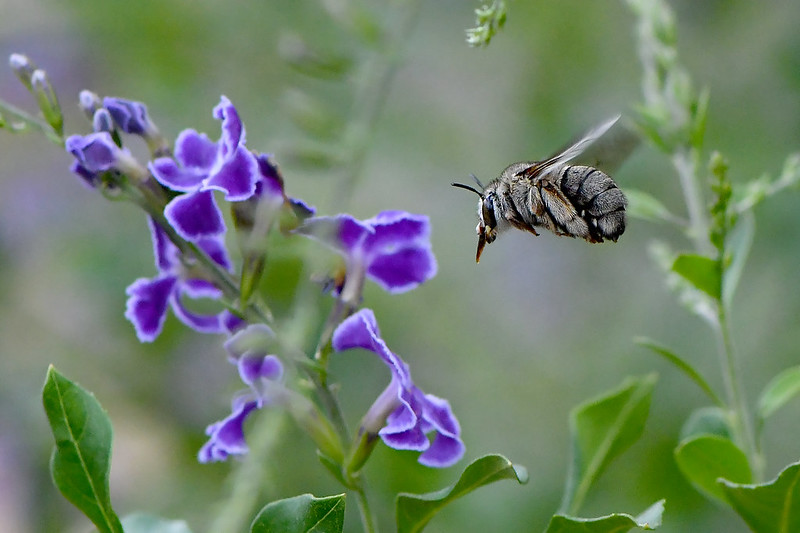 The specter of threats | The strategist

A new study has recommended that 11 Australian bee species be listed as threatened, a five-fold increase, due to the 2019-2020 bushfires. Declining bee populations threaten agricultural production, with consequences for Australia’s agriculture and economy.

Bee populations are very sensitive to climate change. Even gradual increases in temperature caused by climate change decrease the pollination activity of bees and disrupt their relationship with flowering plants. The agricultural use of pesticides and monocultures is also associated with a decrease in the number of bees.

It is a worldwide phenomenon. Weather fluctuations induced by climate change have reduced honey production in Slovenia by up to 90%; the American bumblebee should be classified as endangered after an 89% reduction in population; and the development of bee-free honey anticipates that future numbers of bees will not meet demand.

Bees are essential for the reproduction of three quarters of food plants. Declining populations are both the result and an aggravating factor of climate change, and threatens agriculture globally. How bees respond to climate change is therefore crucial to understanding future threats from climate change.

The left-wing vote collapsed in the Czech elections last week, with the Social Democratic Party and Communist Party losing all of their seats after failing to reach the 5% threshold. Both parties had backed the minority government of billionaire Andrej Babis, which was named in the Pandora Papers leaked days before the election. After its defeat, Babis’ ANO party has no viable path to power, so governance will likely shift to the liberal-conservative coalition, Ensemble.

The tense political situation was further complicated after Czech President Milos Zeman fell ill and was placed in intensive care. The president plays a key role in forming the government. As Babis’ most powerful supporter and only potential savior, Zeman had repeatedly promised to renew him as prime minister despite the electoral defeat. The vacuum created by Zeman’s absence could allow Babis to stay in power for months.

Babis, who has been accused of being the source of Czechia’s anti-European and anti-liberal drift alongside his Hungarian and Polish political allies, has been the subject of numerous corruption scandals and investigations. While the defeat of ANO appears to be a victory for pro-EU forces in Czechia, Zeman’s inability could plunge the country into constitutional crisis.

Last week, hundreds of Americans gathered in New York City to protest both the state’s vaccination warrants and Australia’s lockdown restrictions, with crowds chanting “Save Australia!” outside the Australian Consulate. The protests, which baffled Australians online, reflected a months-long campaign by US conservative media to present Australia’s response to Covid-19 as proof that the country has become an authoritarian dystopia.

The dominant and marginal voices of the Australian right have played a leading role in shaping this narrative, amplified by their conservative American counterparts. Among the invited guests were Director of the Institute of Public Affairs, Gideon Rozner, who noted that Australia is not a functioning liberal democracy; self-proclaimed ‘freedom advocate’ Tony Nikolic, which is suing the New South Wales government over vaccine needs; and MP George Christensen, whose anti-lockdown speech during Question Time was condemned by Parliament and removed from Facebook as Covid disinformation.

The Save Australia rally illustrates the rise of right-wing political mobilization based on conspiracy theories throughout the pandemic and the intensification of the feedback loop between those in the United States and Australia.

The Pandora Papers shed light on the links between Australian accountant Graeme Briggs, chairman of the Singapore-based Asiaciti Trust, and Samoa’s offshore financial sector. In one document, Briggs is described by a Samoan official as the â€œgrandfather of the offshore industryâ€ because of his role in finding legal means for wealthy foreign clients to avoid paying tax on the offshore. returned.

Asiaciti has set up pension funds in Samoa, allowing companies in Belgium, Canada, France, Germany, Japan, New Zealand, Russia and the United States to reduce or avoid taxes in their country of origin. Media say that by helping high-risk clients, Briggs has amassed a fortune of $ 62 million.

The Australian Taxation Office has investigated tax evasion using offshore industries, but claims that there are many legitimate reasons to have an offshore business structure and that in itself is not illegal. Some people identified as having offshore accounts had in fact provided details to the ATO, as required. Around 400 Australians have been named in the Pandora Papers, raising questions about the volume of taxes lost to the Australian economy.

Australian Federal Police Deputy Commissioner Scott Lee revealed cases of far-right extremism handled by the agency’s joint counterterrorism team increased by 750% in the past 18 months . Lee says violent, nationalist racist extremism now accounts for 15% of the team’s workload and expects cases to continue to rise as the pandemic is a key driver of far-right radicalization .

This follows trends identified by the Australian Security Intelligence Organization earlier this year when its chief executive, Mike Burgess, said racist and nationalist ideologies were of particular concern with a greater online presence during the pandemic. Analysts say Covid-19 has fueled racist rhetoric in countries like the US and UK, and across Europe. Conspiracy theories such as the claim that big drug companies orchestrate the virus have been difficult for governments and social media companies to counter.

2021-10-15
Previous Post: US experts recommend Moderna booster for older, at-risk groups
Next Post: Why Italy obliges every worker to present a vaccination passport, every day