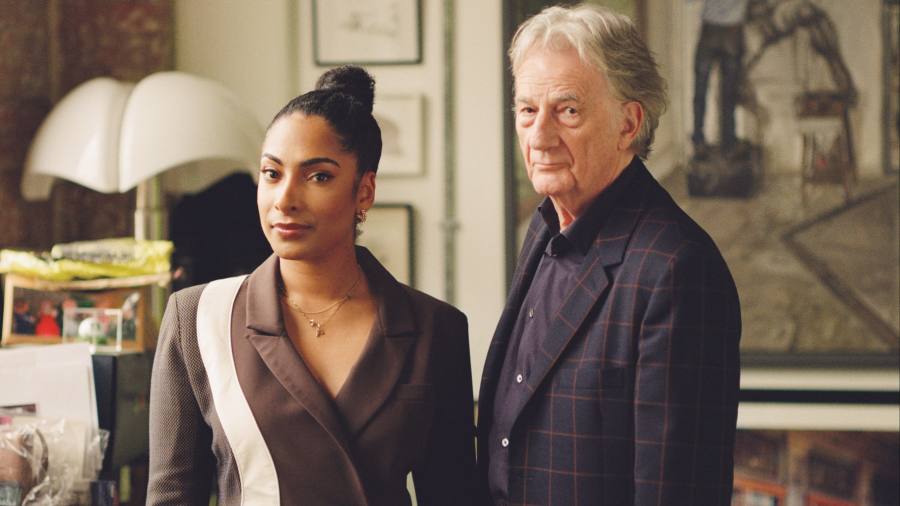 The Wise and the Scholar: Paul Smith and Priya Ahluwalia

Paul Smith’s London office meeting room resembles the designer’s mind in physical form. Inside there are enough racing bikes to stage your own Tour de France and enough vinyl to stock a chain of record stores. The walls are lined with flickering book towers that appear to have been inspired by the higgledy-piggledy stack of skyscrapers at the Antilia Building in Mumbai. A dangerous-looking mound of vintage cycling jerseys and other less easily identifiable sportswear suggests a landslide waiting to engulf the other end of the meeting room table.

Other idiosyncratic wrecks include large plastic dogs, globes of various sizes and vintages, lamps, cushions, and a computer screen that appears to be out of warranty about 20 years old. Smith’s current favorites are a mechanical wooden head hitting a brick and a wooden box called the Useless Box that opens with the flick of a switch, then closes again and again. Half of this material is suitable for a dumpster, the rest for a museum.

But it all belongs where it does, at the heart of the global business built by Britain’s best-known menswear designer. Smith has such youthful playfulness dancing in his eyes, and such energy, that you forget he’s actually 75 years old and has been in business for half a century. In a single sentence, he will reference David Bowie’s visits to this room, helping 1960s football sensation George Best design a fashion line, and his new project with Priya Ahluwalia, who sits on the other side of the table.

This year, she became the first recipient of the “&PaulSmith” program supported by the Paul Smith Foundation, which aims to help future creatives grow their businesses. “We used the foundation to work together on this wonderful project,” Smith enthuses about a collaboration on a 14-piece men’s casual and activewear collection that includes knitwear, t-shirts, shorts and summer hats, and marks its first partnership with another ready-to-wear designer.

“It started, literally, with me rummaging around here, pulling things out,” says Ahluwalia, 29, who wears a double-breasted cafe au lait and cream pantsuit, and has long fingernails painted a glittery green. The styles were developed by combining the hallmarks of each designer: Paul Smith checks, vintage cycling jerseys and Studio One album covers, with Ahluwalia stitching and paneling and strong Nigerian and Indian colours.

Ahluwalia is known for using unsold fabrics to create its collections, which combine couture and sportswear forms with graphic prints and patterns. She graduated from Westminster in 2018 and has since won the H&M Design Award in 2019, was co-winner of the 2020 LVMH Prize and won the Queen Elizabeth II Award for British Design. Born in Tooting, south London, she also draws inspiration from her dual Indian-Nigerian heritage, and her most recent collection references her love of Bollywood and Nollywood, with film photos printed on shirts and hats. t shirts.

As well as looking to Smith’s memorabilia for inspiration, Ahluwalia used leftover fabric from Paul Smith’s collections. Although this is a casual collection, there are echoes of formal wear in garments such as sweatpants with plaid wool panels.

Smith says, “I take pictures, she takes pictures; so we merged our photos and printed them on clothes. A short-sleeved shirt and drawstring shorts were printed with photographs and slogans such as “Turn up the sun and dance”.

Smith clearly appreciates Ahluwalia’s new approach. “Priya’s joy is her skill, novelty, innovation and passion for sustainability and recycling.” However, as someone who has built a multinational company of over 130 stores, he also knows that “ultimately, if you want to have your own business, rather than working for someone else, you have to have a base on how you think.

“The industry has changed tremendously and it’s a much more crowded and competitive place,” he continues. To anyone starting out as a creative today, he advises, “Be brave enough to ask yourself why anyone should buy what I do, what my perspective is, and if you can start answering that, even in a very modest way, then you will be on your way.

Ahluwalia acknowledges that she took Smith’s advice to “keep your feet on the ground and never think you’ve succeeded”. She’s aware that not everyone touted as an exciting new designer can convert that buzz into a long-term business. “I don’t want to become a ‘moment’. Sometimes brands have a really big moment. Everyone loves that. Then it’s like, oh, what happens next? Then they kind of fall off. This is something to worry about; especially because you can make your own noise a lot more now with social media and the internet. Ahluwalia finds that social media helps build community. “We’ve started to build a community of people who really care. [the brand]. What’s interesting about the guys I sell clothes to is that a lot of them are pretty inspired or informed by sports and hip-hop culture. When people tag themselves wearing our clothes, they really show it. She says her clothes are seen “almost like a collector’s item”, but clearly wants to reach a wider audience. “Unlike Paul, of course, I don’t have my own stores. And I don’t have many years of trading.

Smith has half a century of experience to draw on and says with growth comes responsibility. “We are present in 62 countries around the world. When we have fashion shows in Paris twice a year, the show is more in tune with what Priya does. Then to make all those stores work you need to have a balance and Priya will do the same. Finally, it will be beautiful navy blue pants with piping on the side; it will still be Priya, but a little less to get attention.

She smiles. “We’ve been thinking about how to expand our product line to include things that are basically – and this is used as a swear word, but it’s not a swear word – a more commercial offering.” She wants to touch the lives of her customers with more than clothes.

“My vision for my brand is to sit in a room where everything you look at is Ahluwalia, whether it’s a table, a rug, your chair, your TV, I don’t know,” she looks around the room for another product category, “Lights, everything.” But maybe not the mechanical head hitting a brick.