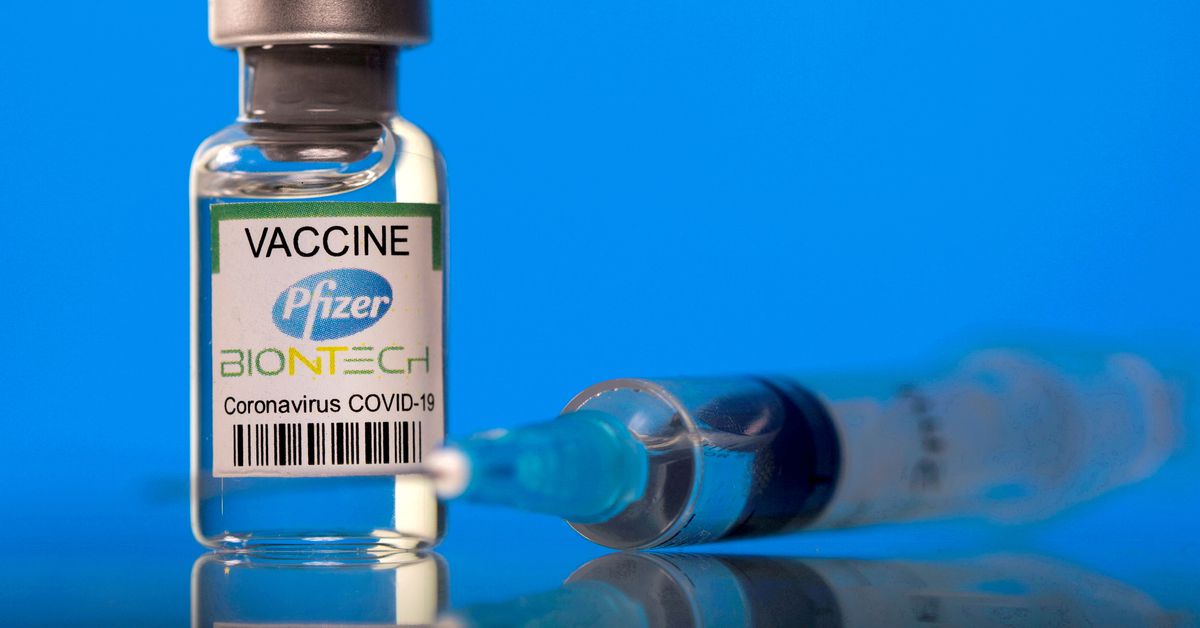 Oct. 26 (Reuters) – A panel of experts voted by an overwhelming majority on Tuesday to recommend that the United States Food and Drug Administration authorize the Pfizer Inc (PFE.N) and BioNTech SE COVID-19 vaccine for children aged 5 to 11, claiming the benefits of the vaccine outweigh the risks.

Clearance for this age group would be an important regulatory step in reaching around 28 million children for inoculation, most of them returning to school for in-person learning.

The vaccine could be available for the younger age group as early as next week. The FDA is not obligated to follow the advice of its external experts, but generally does. The vote was 17 in favor with one abstention.

If the FDA allows injections for this age group, an advisory group with the U.S. Centers for Disease Control and Prevention will meet next week to make a recommendation on the administration of the vaccine. The CDC director will make the final call.

While children who become seriously ill or die from COVID-19 are relatively rare compared to adults, some develop complications and infections in unvaccinated children have increased due to the easily transmitted Delta variant of the coronavirus. Data from the American Academy of Pediatrics shows more than 500 American children have died from COVID-19.

It is “the eighth biggest killer of children in this age group in the past year,” said Dr. Amanda Cohn, CDC pediatric vaccine expert and voting panel member. “The use of this vaccine will prevent death, prevent intensive care admissions and prevent significant long-term side effects in children.”

Only a few other countries, including China, Cuba and the United Arab Emirates, have so far authorized COVID-19 vaccines for children in this age group and younger.

In the United States, only 57% of the population is fully vaccinated, lagging behind other countries like the United Kingdom and France.

Yet the percentage of young children who receive the injections may be low. The vaccination rate in the United States for 12 to 15 year olds is lower than that of other age groups at around 47%.

Since May, the World Health Organization has been urging rich countries to reconsider their plans for immunizing children and instead donate COVID-19 vaccines to the COVAX program for distribution in poorer countries. Read more

The companies said their vaccine showed 90.7% efficacy against the coronavirus in a clinical trial in children aged 5 to 11. read more

The advisers paid particular attention to the rate of heart inflammation called myocarditis which has been linked to the Pfizer / BioNTech and Moderna (MRNA.O) vaccines, particularly in young men.

If the number of cases of myocarditis in the younger age group turns out to be similar to that of 12 to 15 years old, hospitalizations avoided for COVID-19 would be more numerous than those avoided for myocarditis in most of the scenarios analyzed, have FDA staff reviewers said. in documents prepared before Tuesday’s meeting.

Some panelists suggested that due to the risk of myocarditis, the vaccine should be given to a smaller group of children, such as those with conditions that make them more likely to be hospitalized.

â€œThere are certain children who should be vaccinated. The question of how much to use it, I think is an important question,â€ said Eric Rubin, editor of the New England Journal of Medicine.

If licensed, the Pfizer / BioNTech vaccine will likely be the only one available for the age group in the United States for some time.

Moderna released data from its own clinical trial on children aged 6 to 11 on Monday and said it would seek regulatory approval in the age group soon.

It’s unclear when US regulators will take this into account. The company is still awaiting a response to its application filed in June for the use of its vaccine in children aged 12 to 17.

Pfizer said it could have data from its clinical trial in even younger children – ages 2 to 4 – by the end of the year.

Reporting by Manas Mishra in Bengaluru, Michael Erman in New Jersey and Julie Steenhuysen in Chicago; Editing by Caroline Humer and Bill Berkrot